Leader of Independent Greeks declares 'there is now a government' after agreeing partnership with leftists. 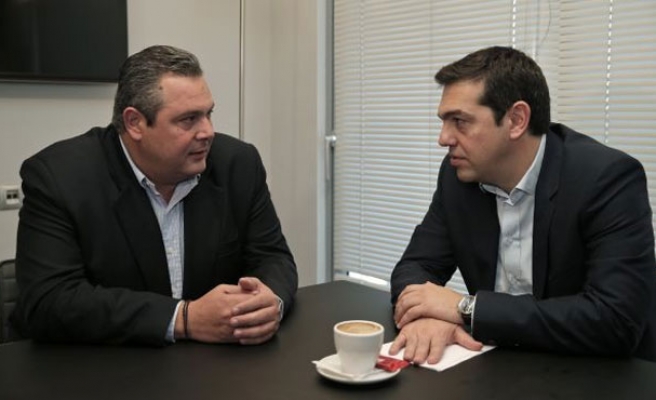 The right-wing Independent Greeks party has agreed to form a coalition government with the winners of Greece's national elections - the leftist party Syriza.

The Independent Greeks' leader Panos Kammenos made the announcement on Monday following a meeting with Syriza’s leader Alexis Tsipras in the Greek capital of Athens.

Kammenos said: "From now on, there is a government. We give a vote of confidence to Tsipras."

The Greek presidency issued a statement saying the country's President, Karolos Papoulias, would receive Tsipras and grant authority to the forming of a new government.

The Independent Greeks party, which is ideologically different from Syriza but shares an anti-austerity policy, had said ahead of the election that it would cooperate with Syriza if it entered parliament.

Syriza won 36.3 percent of the vote in Sunday's elections, with the ruling coalition gaining 27.8 percent, giving Syriza with a projected 149 seats in the 300-seat parliament - two short of an absolute majority needed to form a single-party government.

The election win marks the rapid political rise in Greece of Tsipras, who was born in Athens on July 28, 1974, just four days after Greece's seven-year-old military regime collapsed.

He joined the Young Communists Society in the late 1980s and was elected a member of the Central Council of the National Students Union of Greece between 1995 and 1997.

After serving as the secretary of the leftist Synaspismos Party from 1999 to 2003, he was elected as leader of the party.

Tsipras was elected as a member of parliament in 2009 and four years later became head of the Syriza party after the Synaspismos Party dissolved.

Syriza became the second-largest party in the 2012 general elections by increasing its share of the vote to 16.8 percent, a dramatic increase from 4.6 percent in the 2009 elections.

Tsipras is married with two children and trained as a construction engineer.