Thousands of Greek farmers in Thessaloniki were protesting against pension reform experienced police brutality under Greece’s first ever leftist government in the postwar era. 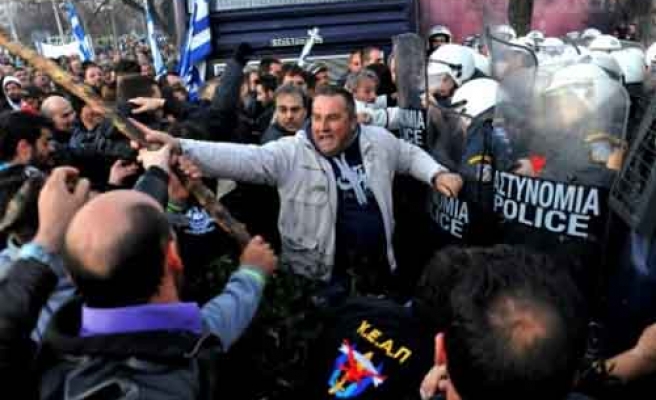 Thousands of farmers on Thursday protested in northern Greece against a controversial pension reform that is part of the country's tough economic bailout, police said, with some demonstrators carrying a coffin bearing the picture of Prime Minister Alexis Tsipras.

Around 5,000 farmers took part in the Thessaloniki protest outside an agricultural fair, with police using tear gas to repel them when they attempted to break in.

Earlier in the protest, some farmers carried a coffin with the picture of embattled Tsipras.

Agriculture Minister Vangelis Apostolou, who was supposed to inaugurate the fair, cancelled his visit.

The farmers have formed protest hubs at dozens of locations on Greece's national highways, intermittently blocking traffic in recent days.

Tsipras' government has announced plans to lower the maximum pension to 2,300 euros ($2,500) from 2,700 euros currently, and introduce a new minimum guaranteed basic pension of 384 euros.

It also wants to merge insurance funds and increase social security contributions by both employers and staff.

Lawyers, engineers and sailors also oppose the reform and Greek unions have announced a general strike -- the third in as many months -- on February 4.

Greece must save 1.8 billion euros from state spending on pensions under a three-year bailout signed with the European Commission, the European Central Bank and the International Monetary Fund in July.

Farmers are also angry as the government plans to scrap benefits such as income tax breaks and cheaper fuel.

The income tax rate for farmers is also to progressively double to 26 percent.