Police are likely to come under pressure over shooting after a watchdog said there was no evidence that a handgun retrieved by police at the scene had been fired. 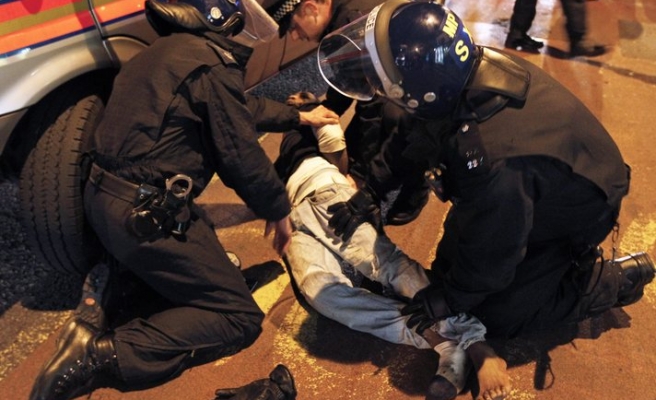 Youths fought running battles with police in English cities and towns overnight but London, where thousands of extra police were deployed, was largely peaceful after three turbulent nights in which youths rampaged in parts of the capital virtually unchecked.

The first riots broke out on Saturday in north London's Tottenham district, when a protest over the police shooting of a suspect led to violence.

Police are likely to come under pressure over that incident after a watchdog said on Tuesday there was no evidence that a handgun retrieved by police at the scene had been fired.

Reports initially suggested Mark Duggan had shot at police before they shot and killed him.

Manchester and Liverpool in the northwest and Birmingham in central England suffered the worst of the overnight violence, which broke out in north London on Saturday after a protest over a police shooting of a suspect two days earlier.

In Birmingham, police launched a murder inquiry after three Muslim men died after being run over by a car in the mayhem there. A friend of the men told BBC radio they had been part of a group of British Asians protecting their area from looters after attending Ramadan prayers at a mosque.

"The car swerved towards them. It was cold-blooded murder," the friend said.

London itself was largely quiet, with some 16,000 police -- 10,000 more than on Monday -- sent onto the streets in a show of force in districts where gangs of hooded youths had looted shops and burned cars and buildings on the previous three nights.

Stephen Kavanagh, deputy assistant commissioner of London's Metropolitan Police, said officers would be out in force again on Wednesday night.

"Tonight we are going to plan for the worst again, that is what London deserves," he told BBC radio.

Prime Minister David Cameron, who cut short a family holiday in Italy to deal with the crisis, was due to chair a second meeting of COBRA, the government's crisis committee, and recalled parliament, a rare occurrence, to debate the violence.

The looting showed the world an ugly side of London less than a year before it hosts the 2012 Olympic Games, an event officials hope will serve as a showcase for the city.

A visit by an International Olympic Committee went ahead on Tuesday "as planned" and the London organisers of the Games said the violence would not hurt preparations for the Olympics.

The chaos in London, and fears of further disruption, led to the cancellation of an England-Netherlands soccer friendly on Wednesday and the postponement of three club matches.

While heavy policing in London prevented all but a few incidents in the capital, copycat looting and violence erupted in cities and towns to the north and west.

Groups of youths in hooded tops fought running battles with police in Manchester, smashing windows and looting shops, and setting fire to a clothes shop.

In nearby Salford, rioters threw bricks at police and set fire to buildings. A BBC cameraman was attacked. Television pictures showed flames leaping from shops and cars, and plumes of thick black smoke billowing across roads.

"These people have nothing to protest against - there is no sense of injustice or any spark that has led to this. It is, pure and simple, acts of criminal behaviour which are the worst I have seen on this scale."

Police said they had arrested 113 people in Manchester and Salford, and 50 in Liverpool.

In Gloucester, in western England, eight fire crews fought a blaze in a large derelict building, cars were set on fire and groups of youths attacked police with rocks and bottles.

Cars were burned and stores looted in West Bromwich and Wolverhampton in central England; and in Nottingham a gang of young men set fire to a police station. There were also disturbances in Birmingham and Leicester in the Midlands, and Milton Keynes north of London.

In London, commuters hurried home early on Tuesday, shops shut and many shopkeepers boarded their windows.

Gangs have ransacked stores, carting off clothes, shoes and electronic goods, torched cars, shops and homes -- causing tens of millions of pounds of damage -- and taunted the police.

Community leaders said the violence in London, the worst for decades in the multi-ethnic capital of 7.8 million, was rooted in growing disparities in wealth and opportunity, but many insisted that greed was the looters' only motive.

The unrest poses a new challenge to Cameron as Britain's economy struggles to grow while his government slashes public spending and raises taxes to cut a yawning budget deficit -- moves some commentators say have aggravated the plight of young people in inner cities.

Police said they had arrested a total of 770 people -- one as young as 11 -- in London since the looting began on Saturday, and had charged 167 suspects, mainly with burglary and public order offences.