Riots spread across UK on third night of violence

Many of the looters came from areas of high unemployment that are also suffering from cuts in social services and said they felt alienated from society. 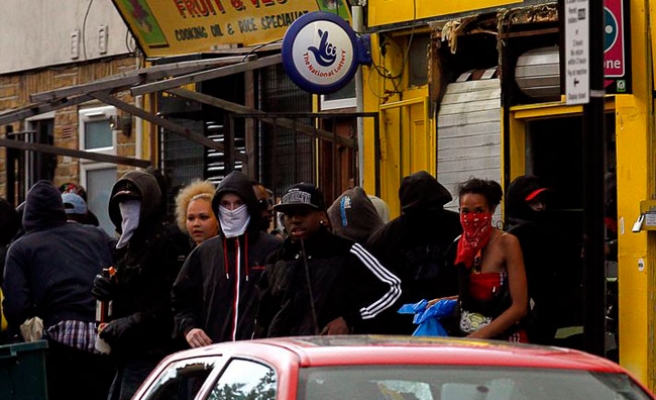 Rioting and looting spread across and beyond London on Monday as hooded youths set fire to cars and buildings, smashed shop windows and hurled bottles and stones at police in a third night of violence in Britain's worst unrest in decades.

Prime Minister David Cameron cut short his holiday to fly home to tackle the violence, which appeared to be led by mobs of young people who coordinated their attacks through mobile phones, and spread to the Midlands city of Birmingham, the northwestern city of Liverpool and Bristol late on Monday.

Many of the looters came from areas of high unemployment that are also suffering from cuts in social services and said they felt alienated from society. Police and politicians said they were simply criminals.

"It's been building up for years. All it needed was a spark," said E. Nan, a young man in a baseball cap surrounded by other youths in Hackney in east London. "We ain't got no jobs, no money ... We heard that other people were getting things for free, so why not us?"

The violence erupted late on Saturday in London's northern Tottenham district when a peaceful protest over the police shooting of a suspect two days earlier was followed by outbreaks of looting and arson.

By Monday, the violence had spread to parts of the south of the city, including Clapham Junction, one of London's busiest railway junctions, Woolwich in the capital's southeast, Ealing in west London and the southern suburb of Croydon.

Rioting spreading beyond the capital, and police said they arrested about 100 people in Birmingham after looters smashed shops and stole goods. Police reported looting and damage in Liverpool and "copy-cat violence" in Bristol in the southwest.

In Hackney, a multi-ethnic area in east London close to the site of next year's Olympic Games, hooded youths set fire to rubbish bins and pushed them down a street towards police, while hurling bottles and bricks.

Many laughed as they ran back when police charged them.

In a street thick with smoke, looters smashed their way into a local shop, stealing whisky and beer. One man grabbed a packet of cereal, another ran off laughing with four bottles of whisky.

"The kids don't have any respect for the police or for property. It's sad for the people who live round here," said one middle-aged local resident, who declined to give his name.

In the poor southeast London district of Woolwich, dozens of locals of all ages and colours looted shops and set at least two buildings on fire, leaving the streets strewn with broken glass and clothes, a Reuters reporter said.

Mobile phone, sports goods and clothing boutiques were the looters' favoured targets, followed by jewellers and pawnshops, he said. Several young men strolled by, balancing flat-screen televisions and computer consoles on their heads. The thinly stretched police were unable to prevent the looting.

In Peckham, a poor area of south London, flames leapt into the air from a torched building and rubble was strewn across the street.

A Reuters witness saw two people break into a shop and rip a 50-inch plasma television off the wall. A youth in a balaclava carried the screen away, to applause from the watching crowd.

Cameron's office said he would cut short his holiday in Italy to chair a crisis meeting, amid growing calls from the public for officials to take control of the situation.

Police had arrested 215 people before Monday's violence, according to Home Secretary Theresa May, and late on Monday police said they had arrested about 100 people in Birmingham and nearly 240 in London.

Despite a heavy presence on some streets, police appeared unable to contain the violence as rioters who had initially coordinated through mobile phones and Twitter became increasingly confident.

Monday's looting began in the afternoon as workers were returning home, many of them forced to walk as buses to areas hit by rioting were cancelled.

In Hackney, youths in brown hoods posed for pictures in front of a burning car on a street corner. "I don't know why they are doing this," said a middle-aged woman who lived nearby. "It's senseless ... they are just cacking on their own doorstep."

The BBC said the Hackney clashes broke out after police stopped and searched a man.

In Clapham, another Reuters witness saw dozens of youths carrying away looted television sets and other electrical goods. He heard two of them discussing the number of Playstation 3s they had stolen, and shouting at another young man to return and get more.

Looters hid their stolen goods in bins and behind the low walls of the Victorian terraced houses typical of Clapham. A large pile of boxed Blackberry phones rested by one wall.

Government officials branded rioters as opportunistic criminals and said the violence would not affect preparations for next summer's Olympic Games.

But the television pictures of rioting and blazing buildings, combined with disarray in the transport network, were likely to dent the capital's image as Britain struggles to avoid an economic recession.

Some commentators described the disturbances as a cry for help from poor areas reeling from the government's harsh austerity cuts to tackle a big budget deficit, which has led to steep cuts in youth services and other facilities.

"It's very sad to see ... But kids have got no work, no future and the cuts have made it worse. These kids are from another generation to us and they just don't care," said Anthony Burns, 39, an electrician from Hackney. "You watch. It's only just begun."

Officials said there was no excuse.

"It was needless, opportunistic theft and violence, nothing more, nothing less. It is completely unacceptable," said Deputy Prime Minister Nick Clegg.

In Ealing, people in a residential street told a Reuters reporter hooded youths had walked along smashing car windows. "About 150 at least came down here, hitting every single car, all in hoodies, screaming and shouting," said one resident who declined to give his name.