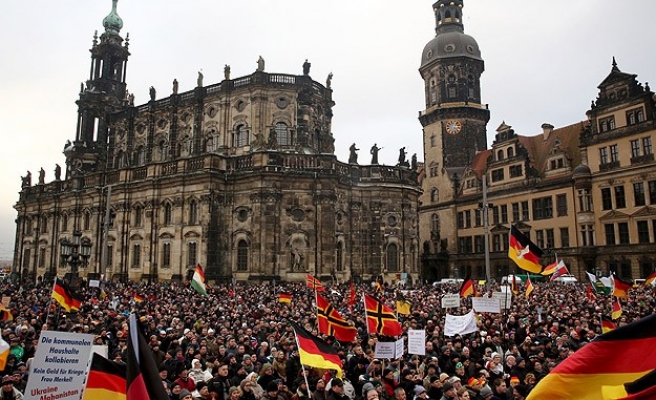 A new German movement that broke away from the anti-Muslim PEGIDA group drew just 500 people to its first rally in the city of Dresden on Sunday, highlighting the obstacles they face in winning further support and making a national impact.

"Direct Democracy for Europe", led by Kathrin Oertel who was a founding member of PEGIDA but quit last month, wants tighter immigration controls, more referendums to decide policies and more money for the police.

Oertel and four other founding members broke from PEGIDA last month following the resignation of figurehead Lutz Bachmann who quit after a photo was published of him posing as Hitler and prosecutors opened an investigation for inciting hatred.

"The goals were the same (as those of PEGIDA) but the ways and means of achieving these goals are no longer the same," Oertel told the crowd, adding she wanted an immigration law and greater involvement for ordinary people in political decisions.

However, she rejected support from the far-right National Democratic Party (NPD) and little was said about Islamisation.

Some 5,000 people had been registered for the demonstration but only about 500 turned up, said local police.

PEGIDA, the Patriotic Europeans Against the Islamisation of the West, brought up to 25,000 people onto the streets of Dresden, in the former Communist East. It tried to spread to other cities and even neighbouring countries but has had only limited success.

Their rallies outside Dresden were dwarfed by gatherings of tens of thousands of counter-demonstrators insisting that Germany welcomes immigrants.

However, the message from the demonstrators has rattled politicians in Berlin, forcing immigration up the agenda and causing some conservatives to accuse Chancellor Angela Merkel of failing to take account of concerns on the right of her party.

The troubles facing PEGIDA and the new group may also hit the new Alternative for Germany (AfD) party which has been dogged by infighting after some of its members made overtures to PEGIDA.

The rump PEGIDA plans a rally in Dresden on Monday.