'International community should be more involved in finding solutions to the conflicts linked to the influx of migrants,' says Romanian president 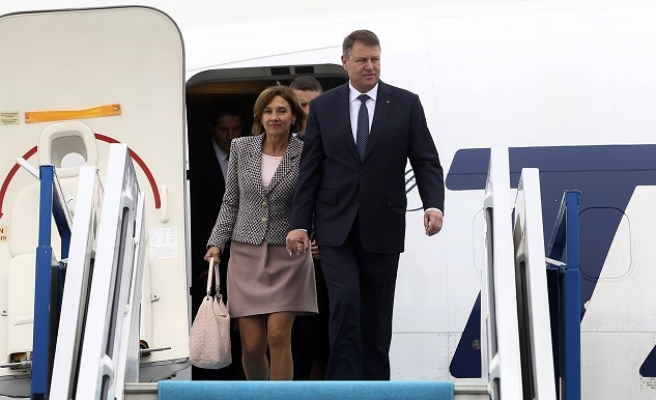 Visiting Ankara, Romania’s president on Wednesday praised Turkey's humanitarian treatment of Syrian refugees and called on the international community to take “collective responsibility” for the crisis.

At the start of his official visit, Romanian President Klaus Iohannis gave an exclusive interview to Anadolu Agency, hailing last week’s EU-Turkey agreement under which refugees reaching Greece from Turkey will be sent back.

Last Friday’s agreement will also see the opening of a new chapter, or policy area, in Turkey’s accession process in exchange for it taking back refugees who traveled from Turkey to Greece. The deal took effect on Sunday.

“We appreciate the important efforts that Turkey is making with regard to the Syrian refugees, hosting an impressive number of people, as well as Turkey’s contribution to managing the flow of the irregular immigration and fighting the human trafficking networks,” Iohannis said.

Iohannis underlined that the current Syrian immigration crisis is not just Turkey’s responsibility but also the international community’s.

“We are aware that Turkey cannot and should not bear alone the burden of accommodating the refugees in need for international protection. Offering humanitarian help to those fleeing their home countries because of conflicts is a global, collective responsibility,” he explained.

He said Romania is willing to help ensure stability in Syria.

“Along with an effective cooperation with Turkey, we consider that the international community needs to be involved more actively in finding solutions to the conflicts directly linked to the massive influxes of migrants. Stabilization of Syria must be a priority.”

During the interview, he mentioned President Recep Tayyip Erdogan’s visit to Romania last April and stressed the two countries’ strong relationship in many areas.

“Our cooperation is very dynamic. We share a series of projects in several fields. Looking at the data of our economic cooperation and the level of investments of Turkish companies in Romania, the results are impressive,” he said.

“We share a strategic partnership, we are neighboring countries on the Black Sea, friends and allies, sharing a robust bilateral cooperation. We also have close political and economic ties and strong people-to-people bonds.”

On Turkey’s EU accession bid, he reiterated Romanian support for “Turkey’s path to the EU.”

“We support the new momentum in Ankara-Brussels relations. We believe that Turkey has an important role to play, as a key partner for the European Union.”

Turkey became an associate member of the then-European Economic Community in 1963 as a stepping stone towards full membership, but accession talks did not begin until 2005.

So far, 37 requirements have been completed, and 35 still remain.

Iohannis said that Romania and Turkey both aim to secure the Black Sea region and support regional stability.

“Romania and Turkey share together the objective of enhancing their contribution to ensure the security and stability of this region. Therefore, our security dialogue is intense in search of solutions to achieve this objective,” he said.

He cautioned that the region faces some security threats.

“The security of the Black Sea region has been lately impacted by the disregard for international law, by ignoring fundamental European security arrangements and commitments, and by a constant military buildup.”

The Romanian leader, however, added that they will try to explore opportunities for strengthening maritime security cooperation in the Black Sea at the NATO summit in Warsaw this July.

He also compared Russia’s illegal annexation of Crimea with Syria and added:

“To the East, we witnessed the illegal annexation of Crimea and a constant military buildup aimed at projecting power in the region, and beyond, as it happened in Syria.”

The UN has declared the referendum that led to the annexation illegal, and the international community largely recognizes Crimea as part of Ukraine. The EU, U.S., and other countries imposed sanctions on Russia following the annexation.

“Our countries are working hard to project stability and ensure a coherent approach at the regional level,” Iohannis said.

The Romania president said that economic cooperation will be one of the top subjects during his visit to Turkey, Romania’s number one non-EU trade partner.

“Together with Turkish officials, we will strive to strengthen our cooperation in order to reach the goal of $10 billion in bilateral trade in the years to come,” he said.

Stressing the Strategic Partnership Agreement signed in 2011, Iohannis said that pact and the subsequent Action Plan have upgraded the bilateral relationship to the highest level.

“This framework has conferred our relations many opportunities for reaching our objectives in the area of bilateral, regional, and international cooperation,” he explained.