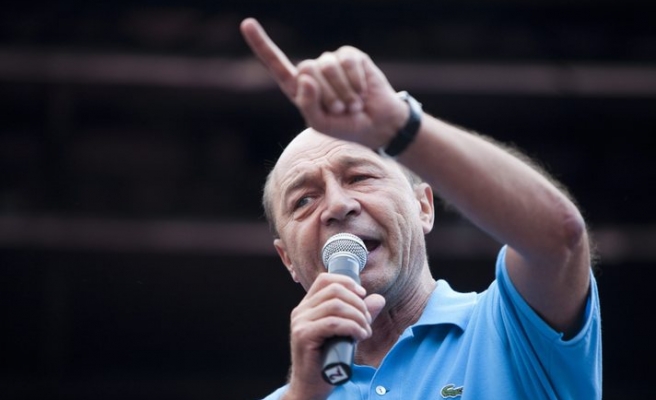 Romanian President Traian Basescu survived a referendum on his impeachment on Sunday after the voter turnout fell short of the required level and derailed an effort by his opponents to oust him from office.

Leftist Prime Minister Victor Ponta's efforts to unseat the conservative Basescu have brought a stern dressing-down from the European Union, which accused him of undermining the rule of law and intimidating judges.

Exit polls showed more than 80 percent of those who went to the ballot box had voted to remove the president.

"The flame of democracy has remained alight. Romanians have rejected the coup d'etat," Basescu said.

Ponta, whose government took office in May, suspended Basescu and held the referendum to seek popular backing for the impeachment for overstepping his powers. The president is unpopular for backing austerity and for perceptions of cronyism.

The electoral bureau's figures have a margin of error of three percentage points and do not include Romanians voting abroad, but it is now almost certain that final figures - probably on Monday - will show turnout was below 50 percent.

Opinion polls had shown some 65 percent of Romanians wanted to remove the former sea captain from office, but the opposition had called for a boycott of the vote and many people were on holiday.

The president's most important power is nominating the prime minister, which could be crucial after a November election that may leave a split parliament. The president also appoints the chief prosecutor and some judges, including to the Constitutional Court.

That court, which previously said the threshold had to be observed, will make the decision on the vote's validity this week.

"The Romanian government will respect all decisions of the Constitutional Court and will act as a factor of stability in the next period, regardless of whether the referendum is validated or not," Ponta said.

Romania has made progress since the 1989 overthrow of communist dictator Nicolae Ceausescu and joined the EU in 2007, but the economy slipped back into recession in the first quarter of this year and pockets of severe poverty remain.

Ponta felt the full weight of EU wrath after his government took on the Constitutional Court, threatening to replace judges and reduce its powers, and ignoring one of its decisions. Brussels said it was concerned about the government's respect for the rule of law, democratic procedures and the judiciary.

The government had tried to make it easier to impeach Basescu by removing the minimum turnout rule, but was forced to back down following harsh EU criticism and a Constitutional Court ruling that a 50 percent turnout was obligatory.

Basescu initially urged Romanians to vote against what he called a coup d'etat, but this week he changed his mind and he and his allies, the opposition Democrat Liberal Party (PDL), asked supporters to boycott the referendum, citing concern about the possibility of electoral fraud.

"We have an entire political class that puts their own interest before the country's," said pensioner Monica Munteanu. "I am not voting."

Brussels has a wide range of levers with which to put pressure on Romania, whose justice system is under EU monitoring. Romania gets European cash to help it catch up with other members and the bloc contributes to its IMF-led aid deal.

Ponta promised to respect the rule of law and the independence of the judiciary, but Brussels replied that it had yet to see proof of this, for example by the replacement of a USL loyalist with a neutral figure as public ombudsman.

The USL says Basescu - whose term expires in 2014, when he cannot run again - had undue influence over the judiciary after the Constitutional Court ruled against some government laws.

The president can block legislation but only once before parliament can overrule him with a second vote.

"I voted to take him down because he cut my pension and he doesn't deserve to be in power," said Sandu Neacsu, a 66-year-old pensioner from Pantelimon near the capital Bucharest.