Violence erupted when protesters shouting insults at the immigrants threw stones at the centre and set rubbish skips outside the building alight. 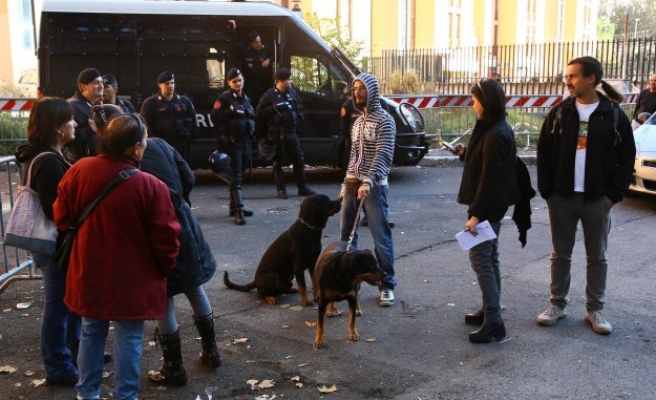 Rome's mayor ordered the evacuation on Thursday of 45 children from a centre for immigrants that has been under attack for four days by local people.

Mayor Ignazio Marino said the building, which houses around 70 people including a few homeless Italians, had been "seriously damaged" and the children were no longer safe there.

The centre in Tor Sapienza, a poor neighbourhood on the eastern outskirts of the capital, has become the latest focus for resentment that has built up over years when Italians have struggled with falling incomes and rising unemployment.

Violence erupted on Monday night when protesters shouting insults at the immigrants threw stones at the centre and set rubbish skips outside the building alight.

A heavy police presence has failed to quieten residents, who accuse the migrants of drug trafficking and prostitution. Protesters have continued to hold marches and throw stones and bottles.

Prosecutors have opened an investigation to identify those responsible, Marino's office said in a statement, adding that "Rome rejects all forms of violence, racism and xenophobia."

In September Corcolle, another eastern suburb of Rome, was the scene of similar violence and there have been other recent attacks on immigrants in the capital.

The tensions have helped fuel a surge in support for the anti-immigrant Northern League party, led by 41-year-old Matteo Salvini who took over the party a year ago.

On Saturday Salvini, who is frequently accused of fanning violence, was attacked in his car by students when he turned up at a Roma encampment in Bologna which some locals, supported by the Northern League, say should be closed down.

Mario Borghezio, an outspoken Northern League member of the European Parliament, said he would visit Tor Sapienza on Friday and bring the residents the "solidarity" of Salvini.