The Dutch embassy pledged to cooperate with Italy to catch the perpetrators. 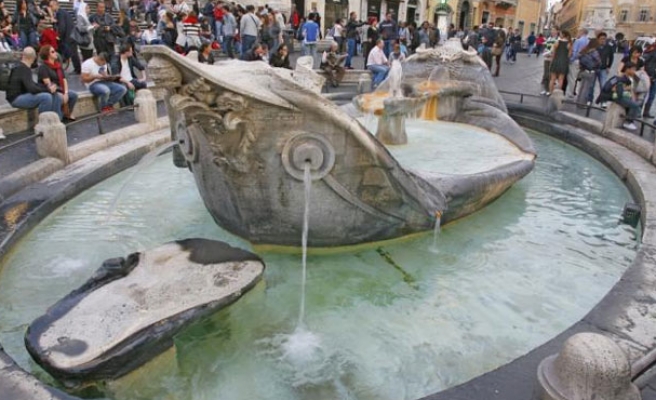 Dutch soccer fans caused "permanent" damage to a 500-year-old Rome fountain, an expert said on Friday after a drunken rampage by supporters that the city's mayor branded "hardened hooligans".

The Barcaccia, a boat-shaped fountain at the foot of the Spanish Steps, was chipped by beer bottles thrown and kicked by fans of Rotterdam team Feyenoord before a Europa League match against AS Roma on Thursday.

Police fired teargas to clear hundreds of fans and detained 23 of them. Six more were later arrested for causing injury, resisting arrest and insulting public officials, a judicial source said on Friday.

The damage to the Baroque fountain by Pietro Bernini, a sculptor responsible for many of Rome's greatest works, was serious, Anna Maria Ceroni, a local official responsible for restorations, told the Corriere della Sera newspaper.

"The extent of the damage still needs to be determined, but it's permanent," she said.

Feyenoord's general director, Eric Gudde, said he was ashamed by the "behaviour of a group of brainless people who Feyenoord distances itself from completely and who fill every normal thinking Dutch person with horror".

The Dutch embassy pledged to cooperate with Italy to catch the perpetrators.

"I am furious," retired shop owner Iola Commandini said in Rome's Spanish Square where the fountain is located. "They haven't come back today to look at what they have done because they are afraid they'll get beaten up."

Prime Minister Matteo Renzi said Italian authorities would look into whether they had responded correctly, but placed the blame for the incident squarely on the "barbarians".

The match at Rome's Stadio Olimpico ended with a 1-1 draw.