Catalonia police were banned from using rubber bullets that have already been used by Indian police and caused numerous young Kashmiri men to lose their eyesight. 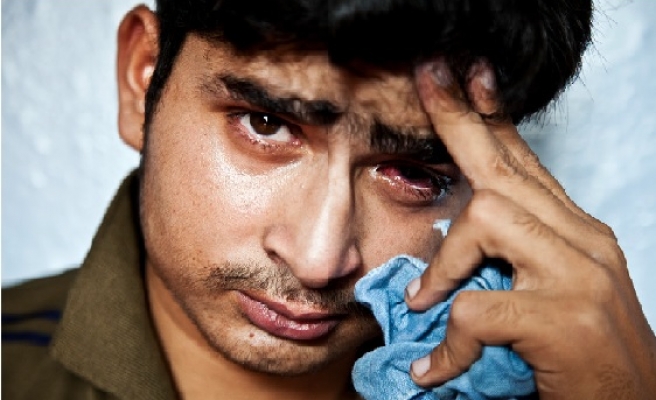 A ban on the use of rubber bullets by the police force in Catalonia comes into force on Wednesday following a campaign led by seven people who each lost an eye on the streets of Barcelona.

The latest victim Ester Quintana, 42, was hit by a rubber bullet during a general strike in November 2012, Guardian reported. Her pressure group Ojo con tu Ojo, along with Stop Bales de Goma, mounted the campaign after seeing its efforts for justice fail in the Spanish courts.

The European parliament and the United Nations have both urged an end to the use of rubber bullets, that have not been used in the UK since the worst of the troubles in Northern Ireland in the 1970s. But in Catalonia, usage has increased along with the number of street protests and strikes due to the Spanish economic crisis. Catalonia has one of the highest per capita number of police officers in Europe with 5.05 per 1,000 citizens, compared with 2.6 in England and 2.99 in Germany.

Campaigners called into question the use of the weapon, which by law should not be fired from a distance of less than 50 metres or hit above the knee.

Casualties of Kashmir’s Unrest Live in the Dark

There are also numerous young men in Kashmir who have lost their eyesight after being fired at by the Indian troops and police with pellet guns. Most of the injured have lost one eye. Mr. Dar had lost both, and New York Times reported his story.

The last thing Mr. Dar saw was a policeman 50 meters (160 feet) away, with his gun pointed straight at him. That moment bisected his life. Before that moment there were colors and streets, his favorite Wayne Rooney blazing through the TV screen with the ball at his feet, books with their large and small typefaces. Now, there is darkness.

Before that moment, he was an economics student dreaming of joining a business school. Now, he is a young man blinded into sitting inside a room, chilly on a sunny day.

On June 14, Mr. Dar was walking back from a religious gathering in Nowhatta. It was Ramadan, the Muslim month of fasting. He entered a street leading to his uncle’s house and saw a group of policemen coming out of the street, firing teargas shells. “There was smoke all over,” he recalled.

Mr. Dar stood on a black manhole cover. All that stood between him and the policeman was the tear gas smoke. “He pointed his gun straight at me, but I thought he was just scaring me,” he said.

The policemen fired the pellet gun.

Mr. Dar had more than 20 pellets in his upper body, seven of them making an arc around his heart, and two in his face: one in each eye.

Mr. Dar sought solace in faith and accepted his blindness as the will of God: “There is no other way. Or I will get depressed. And depression can be fatal, not only for me but for my relatives and friends too.”

His voice was sharp and his shoulders erect. Maybe it was the hope that the doctors will be able to heal him, his firm belief that God will not forsake him.

A pellet cartridge holds around 500 little iron balls in it, a senior police officer said, and when shot, they scatter in the air, hitting anyone in the range. The Jammu Kashmir Police say that the pellet gun is a nonlethal weapon that is very useful in controlling crowds without causing much damage.

According to the ophthalmologist, S.M.H.S. Hospital has already treated more than 300 young men with pellets in their eyes. “And most avoid coming here if they can, because of the spies that police has posted here,” said the doctor, who asked to remain anonymous because of the sensitivity of the matter. “They keep a check on our registers and see who has pellet injuries, and then the police comes and arrests them.”