Putin promised new homes for victims who lost their houses to the country's deadliest wildfires in decades. 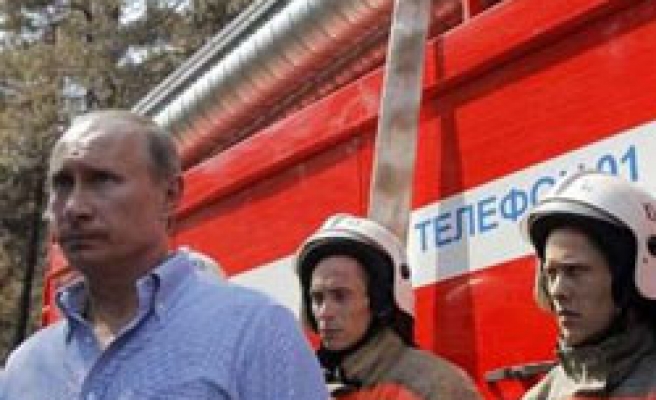 In the stifling heat at a hostel in this run-down city in Russia's heartland, Prime Minister Vladimir Putin promised new homes for victims who lost their houses to the country's deadliest wildfires in decades.

With flames still consuming tinder-dry forests and fields across European Russia in a heatwave unseen since tsarist times, the Kremlin has pledged to pay for new housing by winter for some 2,000 'pogoreltsy' -- families whose homes have burnt down.

The generous handouts -- about 2 million roubles ($66,980) per household for homes which in many cases had little market value -- have some other Russians saying they wished they had lost the roofs over their heads too.

The payouts are part of a string of populist gestures since the blazes intensified last week to try to prevent the stumbling disaster response turning into a political liability ahead of parliamentary and presidential votes in the next two years.

"We are so grateful that you handled the situation so cleverly," a middle-aged woman told Putin on Wednesday at the hostel in Voronezh, some 500 kilometers (310 miles) south of Moscow, where 155 victims from villages have taken shelter.

Critics and analysts say Putin's government is throwing money at a problem that it helped create and did little to avert, with potentially costly consequences down the road.

In the "super-centralized system of government" established during Putin's 2000-2008 presidency, "regional officials lack the resources and the authority to make major efforts to deal with disasters", political analyst Nikolai Petrov said.

As a result, while the threat of severe wildfires should have been clear long before they ignited homes and killed at least 50 people, "practically nothing was done to prepare", said Petrov, a scholar at the Carnegie Moscow Centre said.

"The scale of the disaster demonstrates the collapse of state government in this sector (forestry) at a minimum," opposition Communist Party leader Gennady Zyuganov told the Interfax news agency.

Putin and his hand-picked successor, Dmitry Medvedev, are eager to avoid a major shift in public opinion ahead of the 2012 presidential vote expected to return one of them to the Kremlin for at least six years.

After the 2008 global economic crisis ended Russia's oil-fuelled boom, Putin has worked hard to ensure disgruntlement over the fires does not bubble over into protest.

He reminded a blogger who posted an expletive-laden tirade that Russia was dealing with the worst heatwave since before the Communist era and said other countries also suffer from deadly wildfires.

The scene at the hostel in Voronezh contrasted sharply with Putin's visit last Friday to the remains of a village near the Volga River city of Nizhny Novgorod where a crowd of angry fire victims confronted him, demanded compensation.

The compensation scheme will provide a moderate boost for the construction industry, still recovering from the economic crisis and plagued by corruption.

In a characteristic move, Putin on Tuesday pledged to personally monitor construction, saying security cameras would be installed at each site with live feeds to his own home.

Media reported that several people have already been caught trying to burn their own houses.

At the hostel, a woman told Putin that her 92-year-old mother, who had lived with her in the home they lost to the fires, wanted to live separately.

"I see that you want to have two houses," Putin said, smiling ironically. "So if you think that your elderly mother is a separate family, we are ready to look into this issue."