Medvedev declared a state of emergency on Monday in seven of Russia's 83 regions due to wildfires fueled by the worst heatwave in over a century. 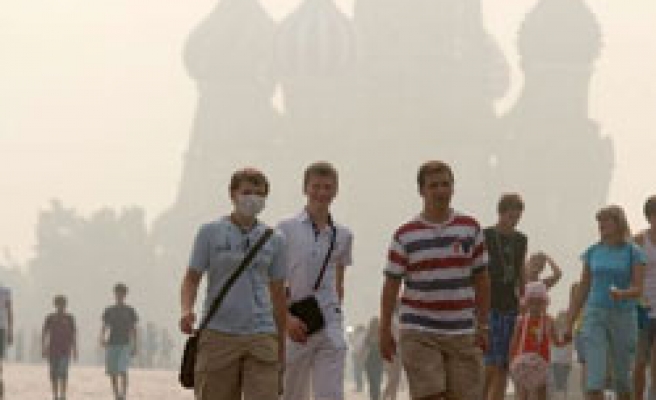 Russia declared a state of emergency in seven regions on Monday after wildfires killed at least 34 people and left thousands homeless in the worst heatwave since records began 130 years ago.

Fires raging across European Russia have destroyed homes, forests and fields, already scorched for weeks by an unprecedented heatwave.

Drought in some regions of Russia, one of the world's biggest wheat exporters, has sent global prices soaring to 22-month highs and driven thousands of farmers to the brink of bankruptcy.

Officials said firefighting manpower was increased ten fold near a nuclear research centre in Sarov, Niznhy Novgorod region, one of the hardest-hit provinces, around 350 kilometres (220 miles) east of Moscow.

Nearly 700 wildfires were burning over 1,210 square kilometres (750 square miles) of land, a spokeswoman for the Emergency Situations Ministry told Reuters.

In the capital Moscow, residents wore masks against the choking smog caused by peat fires stoked by the hot weather.

President Dmitry Medvedev declared a state of emergency in the Voronezh, Nizhny Novgorod, Vladimir, Ryazan, Mordovia and Mari El regions as well as the province that rings the capital, the Kremlin said in a statement.

The toll rose from 28 dead on Sunday to at least 34 on Monday, an Emergency Situations Ministry spokesman said. He would not give details about the locations or specific cause of death for the new fatalities.

More than 180,000 people were fighting the blazes and 18 aircraft dumped 3,000 tons of water on the fires and threatened areas on Sunday, the ministry said.

Firefighters near Maslovka in the southern Voronezh province, where the temperature on Monday hit 44 degrees Celsius (111 degrees Fahrenheit), welcomed a respite from high winds that have fanned flames.

The nuclear centre, now a research facility, was a top-secret location in Soviet times codenamed Arzamas-16, where the first Soviet atom and hydrogen bombs were designed.

A spokesman for state nuclear agency Rosatom, Sergei Novikov, told Ekho Moskvy radio the centre was not currently in danger but said firefighters were on guard in case new blazes broke out on land south of the centre.

Thick smoke blanketing the area prevented Emergencies Ministry aircraft from dropping water on the flames. ITAR-TASS news agency reported that at least five civilian flights were cancelled at Nizhny Novgorod airport because of the smoke.

Smog returned to the capital after a hiatus over the weekend. The concentration of pollutants, which has caused health concerns, was slightly lower than the absolute summer high recorded last week, an air monitoring expert said.

Pollution rose up to 10 times above the norm on Wednesday, the agency said, the worst this summer but lower than a record high reached during wildfires in 2002.

Russia's heat wave is expected to last through the week at least.