Russia's severe drought may cut its grain output by 40 percent this year, grain crop may fall to below 60 million ton 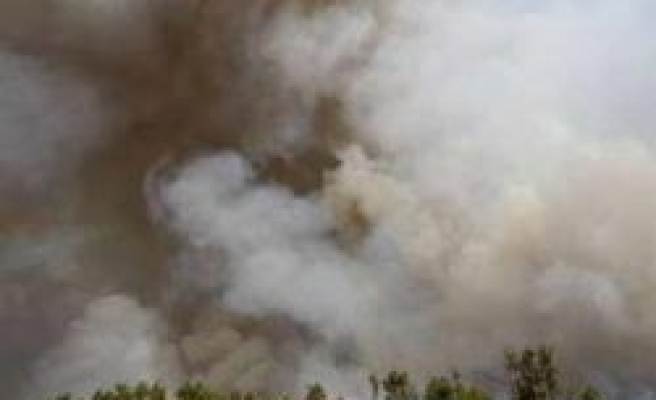 Russia's severe drought may cut its grain output by 40 percent this year, a leading analyst said on Monday, as Russia's weather service forecast short-lived rains in some areas which could help planting for next year.

Coming after last year's bumper 97 million tonne crop Russia's worst drought in over a century has destroyed crops over large areas, sparking wildfires which have shrouded Moscow in eyestinging smog for days, and forcing up world grain prices.

SovEcon estimated the area on which grains have been lost at 7.6 million hectares by Aug. 1, potentially leaving the harvesting area at around 36 million hectares, a blow to Russia which is one of the world's biggest grain exporters.

This may result in a 34-35 percent decline in total grain production to 63-64 million tonnes. But it may fall further to below 60 million tonnes under a more pessimistic scenario as the losses may prove to be bigger and yields lower.

SovEcon has already revised down its forecast for Russia's 2010 wheat crop by 4 million tonnes to 43-44 million.

But Russia's second most important export cereal barley appears to be hit worse and its output is expected to be 8.7-9.3 million tonnes, the lowest in the last 40 years.

Russia's weather forecasting service Rosgidromet said on Monday rains were expected on Aug.16-18 in drought-hit European Russia, and while these were unlikely to soften crop damage they could improve conditions for winter grain sowing.

"The strength of the rains is not clear, I'm not sure they will be able to overcome the anticyclone. And they will end soon," Anna Strashnaya, head of the Agricultural Forecasts Department at Rosgidromet, told Reuters.

Strashnaya was referring to the anticyclone which has held hot dry weather over European Russia for more than a month.

"I feel a little more optimistic about the winter sowing though," she said.

The ferocity of the drought has prompted worries that planting of wheat before the winter could be affected, hampering Russian efforts to build up stocks next year to compensate for lost production this year.

Wheat prices showed little response to the rain news with CBOT wheat for September delivery down 0.11 percent to $7.01-3/4 a bushel by 1118 GMT, after dropping 1.5 percent on Friday.

"I think the wheat market was starting to get exhausted and was overdue for some modest correction, but I also think spec longs will defend their positions," said Shawn McCambridge, an analyst for Prudential Bache Commodities.

An expected very tight balance of supply and demand in 2010/11 may raise the demand for feed grains other than barley, primarily wheat and lead to an increase of imports of malting barley and malt, SovEcon said.

SovEcon believes that government stocks of 1.45 million tonnes of barley are unlikely to be exhausted in 2010/11 and part of it will be put into 2011/12 carryover stocks, as winter sowing conditions remain unfavourable in many regions.

The availability of barley for domestic consumption may fall by around 6 million tonnes from 2009/10, which will raise substantially the demand for other types of feed grain, mainly wheat, from animal breeders and animal feed makers.

Outside of Russia one of the world's biggest importers of rice and wheat, Iraq, said it had harvested just under 2 million tonnes of wheat and did not expect to be affected by the Russian drought.

The United Arab Emirates said on Monday it would not be affected by Russia's grain export ban.