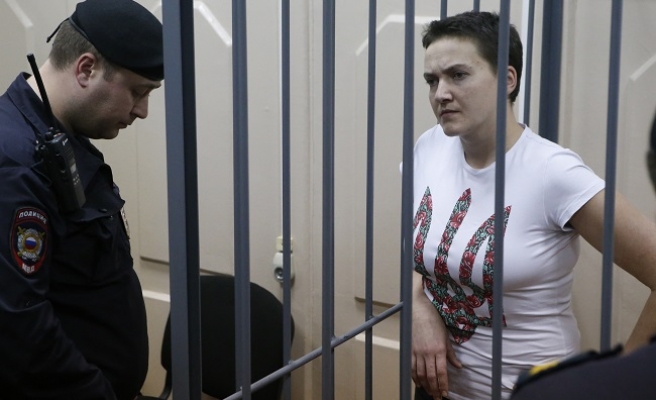 A Russian court on Tuesday ruled that a Ukrainian female helicopter pilot held over her alleged role in the killing of two Russian journalists must stay behind bars for another six months as her trial is set to go ahead.

Nadia Savchenko, who is feted for her heroism in Ukraine, faces up to 25 years in prison for her alleged participation in the killing of the journalists in war-torn eastern Ukraine last year.

Savchenko, 34, has denied the charges and spent more than 80 days on hunger strike to protest her detention.

She appeared in court in the southern Russian town of Donetsk on the border with eastern Ukraine for a second preliminary hearing after her lawyers' request for the trial to be moved to Moscow was denied.

During the closed hearing, lawyers asked that she be released from jail during her trial, citing her diplomatic immunity as a Ukrainian delegate to the Parliamentary Assembly of the Council of Europe.

"The court did not listen to the defence's reasoning and extended Savchenko's detention behind bars by six months," her lawyer Mark Feigin told journalists outside court. He said her team would appeal the ruling.

"Any judge or investigator who has a hand in detaining a Parliamentary Assembly delegate becomes a legal target for criminal prosecution," another defence lawyer, Ilya Novikov warned, saying Kiev had already charged those responsible.

Russian prosecutors say Savchenko was involved in her capacity as a volunteer in a Ukrainian battalion.

She is accused of monitoring the journalists and directing artillery to fire at them as they filmed at a checkpoint.

Her lawyer Feigin called the journalists' deaths "a dramatic event that happened by chance."

The prosecution also accuses her of illegally crossing the border into Russia without documents, posing as a refugee, before being detained.

Kiev denies this and accuses Russia of kidnapping Savchenko and smuggling her from Ukraine.

Savchenko was one of the first Ukrainian women to train as an air force pilot and served in Iraq for six months.

The spokesman for the powerful Investigative Committee that oversees major cases, Vladimir Markin said Savchenko "was given all her rights in full and even more than usual."

The court agreed to the request by her defence team for the case to be heard by three judges.

Kiev and the West accuse Russia of sending weapons and troops across the border to help separatists in a conflict that has claimed at least 8,000 lives since April 2014.