The Russian government warned that the country's deadliest wildfires in nearly four decades posed a nuclear threat if they are not contained. 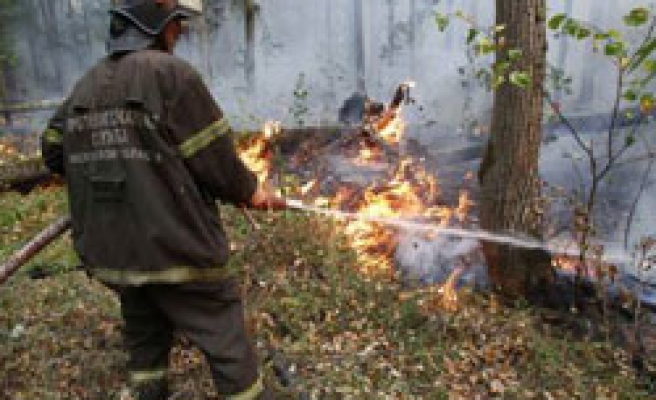 The Russian government warned on Thursday that the country's deadliest wildfires in nearly four decades posed a nuclear threat if they are not contained, as the death toll rose to 50 and the blazes continued to spread.

The worst heatwave in more than a century is set to intensify on Friday, with record temperatures of 40 celsius (104 fahrenheit) expected and to continue into the next week, weather forecasters said.

Prime Minister Vladimir Putin announced a ban on exports of grain and grain products from Aug. 15 until December, and his spokesman said it would apply also to contracts already signed.

Emergencies Minister Sergei Shoigu said heat from fires in the Bryansk region, which already has nuclear contamination from the Chernobyl disaster more than 20 years ago, could release harmful radioactive particles into the atmosphere.

"In the event of a fire there, radionuclides could rise (into the air) together with combustion particles, resulting in a new pollution zone," he said on state television, without going into detail.

Shoigu added two fires had already broken out in the Bryansk region, some 400 km (250 miles) southwest of Moscow, but they were quickly contained.

Forest and peat bog fires have burned hundreds of homes, leaving thousands homeless in the hottest summer since records began 130 years ago, prompting leaders to declare a state of emergency in seven of the worst-hit regions.

The territory covered by wild fires increased to 756 sq miles on Thursday from 730 sq miles a day ago, according to the Emergencies Ministry website.

Health Minister Tatyana Golikova told a government meeting that 44 people across the country had died in the fires themselves, while six had died in hospitals, taking the death toll to 50, two more than the day before.

Temperatures in Moscow topped 36C but a change of wind direction provided some respite in the capital by blowing away oppressive and toxic smoke that had blanketed the city.

The extreme heat may only abate after Aug. 23, he said.

The Ministry of Defence denied the reports. However, it also denied last week that fire had ravaged a naval base. President Dmitry Medvedev sacked several senior navy officers on Wednesday after it was revealed that the blaze had indeed occurred.