A forest fire destroyed at least 13 hangars containing aircraft and equipment at a navy base outside Moscow last Thursday, Russia's Prosecutor General's office said on Tuesday. 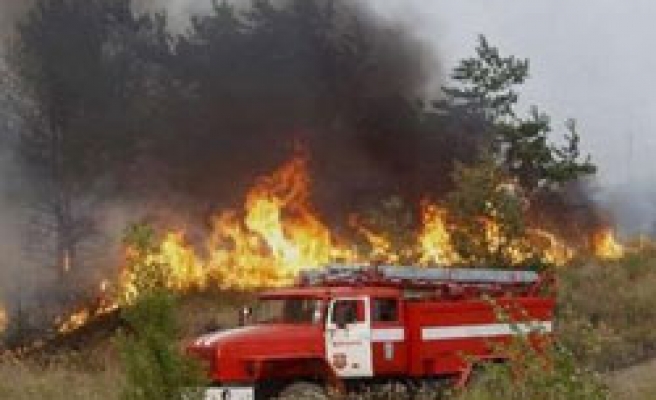 A forest fire destroyed at least 13 hangars containing aircraft and equipment at a navy base outside Moscow last Thursday, Russia's Prosecutor General's office disclosed on Tuesday.

Russia's beleaguered defence ministry had initially denied reports of the blaze. It described a story that 200 planes had been destroyed as "fiction" and said the base concerned did not even exist.

The Prosecutor-General's statement was the first official confirmation of the fire at the base near Kolonna, 100 km (60 miles) southeast of Moscow. It gave few details of the damage and a spokesman declined further comment.

"The base quarters, the accountant's office, a club, two garages, 13 hangars with aviation equipment of various kinds and 17 parking areas with vehicles located there were destroyed by a fire," the prosecutor general's main investigative unit said in a statement.

The tabloid-style Lifenews.ru website, renowned for its hard-hitting stories, said around 200 planes and helicopters, worth up to 20 billion roubles, were lost in the blaze. It broadcast a video clip showing charred equipment and ash.

Russia's navy has been plagued by a series of disasters since the collapse of the Soviet Union, including the Kursk submarine disaster in 2000 in which 118 sailors died.

More than 40 people have died and about 2,000 families have lost their homes to forest blazes this summer stoked by Russia's worst heatwave in decades. Russia's leaders have declared a state of emergency in seven provinces to contain the fires.