Russian Foreign Minister Sergei Lavrov and French counterpart Laurent Fabius said they had differing visions of how to proceed toward the common goal of a peaceful and chemical weapons-free Syria. 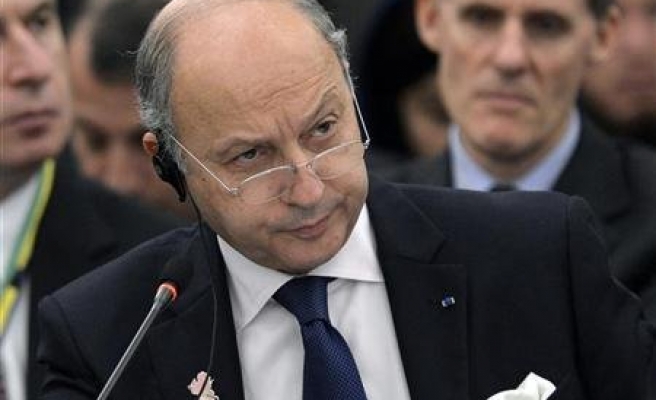 Russia and France on Tuesday admitted they still had differences over how to solve the Syrian conflict ahead of a debate in the UN Security Council over stripping the country of its chemical arsenal.

After meeting in Moscow, Russian Foreign Minister Sergei Lavrov and French counterpart Laurent Fabius said they had differing visions of how to proceed toward the common goal of a peaceful and chemical weapons-free Syria.

Russia also strongly rejected claims by both France and the United States that a UN report released on a sarin attack outside Damascus on August 21 placed the blame with the Syrian government.

Despite sharing the same goal of destroying Syria's weapons and holding an eventual peace conference, "we have differences over how to achieve it," Lavrov said.

He added that the UN report "proves that chemical weapons were used" but does not prove that the regime of Bashar al-Assad was behind it, he said, adding that "there is still no answer to the question of where the missile (used in the August 21 attack) was produced."

There is still "most serious basis to believe that this was a provocation," Lavrov said of the attack, calling on world powers not to "play up emotions" when making decisions, but rather "rely on professionals".

Fabius said however that the UN report left "no doubt that the Damascus regime was responsible" for the chemical attack.

He said there was a "difference in approach" between France and Russia on the methods required to reach peace but the two sides were "perfectly agreed" on the need for a political solution.

No Chapter Seven in resolution'

Lavrov and Fabius met in Moscow a day after France, United States and Britain said they will push for a strong resolution. Diplomats said France and Britain are preparing a draft that will demand a threat of sanctions if Assad does not comply with the chemical disarmament plan.

Lavrov however stressed that the agreement he reached with American counterpart John Kerry Saturday meant that the opposition will also be responsible for compliance and that the resolution will not be under the chapter of the UN charter that allows the use of force.

"The resolution... will not invoke Chapter Seven," he said.

The United States had threatened a military strike on Syria after declaring that the chemical attack on the suburb of Ghouta near Damascus was carried out by the Syrian government and killed over 1,400 people.

The report by UN experts released Monday said the attack used sarin gas delivered by surface-to-surface rockets, but did not assign blame to either side.

China, which has voted together with Russia in the past against Security Council resolutions spelling out intervention or sanctions in Syria, on Tuesday said it would be taking a "serious look" at the UN report.

However foreign ministry spokesman Hong Lei did not indicate whether China is placing the responsibility for the attack on the Syrian government, or if its position on possible sanctions is shifting.

Washington's UN ambassador Samantha Power said Monday that the "high quality" sarin could only have been used by the government.

UN chief Ban Ki-moon condemned the use of chemical weapons in Syria as "a war crime" and that the report prepared by experts "makes for chilling reading."

He added that the use of sarin had been proved "unequivocally and objectively" and that the Ghouta attack was "the most significant" with chemical weapons since Saddam Hussein unleashed poison gas in Halabja, Iraq, in 1988, killing thousands.

Syria's foreign ministry on Tuesday issued a statement slamming Western efforts as the attempt to "impose their will" and support rebels.

"The United States, France and Britain have revealed their true objective... which is to impose their will on the Syrian people," said the statement, accusing them of "supporting armed terrorist groups."

Fighting has worsened in Syria as the diplomatic wrangling goes on and Turkey said it shot down a Syrian military helicopter on Monday after it entered Turkish airspace.

"It was continuously warned by our air defence," Arinc said, adding there was no information about the fate of its crew because the helicopter fell on Syrian soil.