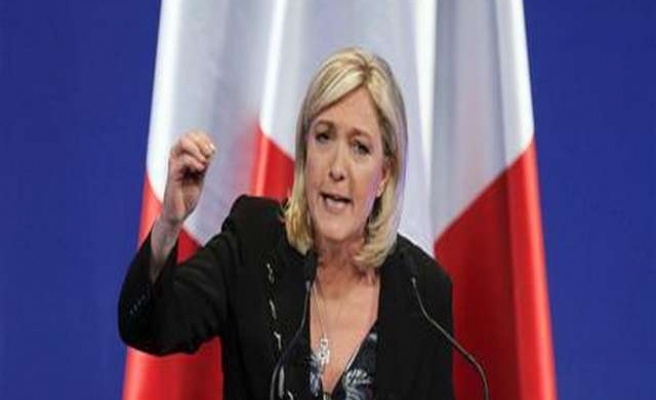 France's far-right National Front re-elected its leader Marine Le Pen with a 100 percent mandate on Sunday at a party congress marked by closer ties to Russia and the rise of a new generation of the Le Pen dynasty.

Opinion polls suggest Le Pen, who took over from her father Jean-Marie at the party's last congress in 2011, will repeat his 2002 feat of reaching a second-round run-off for president of France at the forthcoming 2017 election.

"No one can be in any doubt that we will be in the second round," Le Pen told some 2,000 enthusiastic supporters, who chanted "Marine, President."

The anti-immigrant party came first in this year's European Parliament elections in France, winning a quarter of all votes. Dissatisfaction with traditional parties on the right and left and frustration at Socialist President Francois Hollande's failure to fix high unemployment have bolstered its support.

It also appeals to voters unhappy with the multicultural face of France and angry about the power of European Union bureaucrats. Meanwhile, the conflict in Ukraine has allowed it to differentiate itself further from mainstream parties, giving vocal support to Russia and denouncing Western sanctions.

The Mediapart investigative web site says the party, which accuses Western banks of snubbing it, has secured loans worth 9 million euros ($11 million) from FCRB. The FCRB and the National Front could not be reached for comment on Sunday.

Russian lawmakers also attended Sunday's congress. Andrei Isayev, who sits in the Duma lower house, said on his Twitter account that he gave a speech there. Andrei Klimov, deputy chairman of the Russian upper house of parliament's international affairs committee, was also in attendance according to French media. Both men are members of the United Russia party, which is close to President Vladimir Putin.

Largely ostracised by Western leaders, who accuse him of fomenting a separatist revolt in Ukraine, Putin appeals to the National Front thanks to his image as an uncompromising patriot.

Le Pen has fiercely attacked the French government's recent decision to suspend delivery of a helicopter-carrying warship to Russia, saying France has acted against its national interest and caved in to U.S. pressure.

"We are wrongly accused of being anti-Europe, but we are for (a Europe) that stretches from the Atlantic to the Urals, not from Washington to Brussels," Le Pen said on Saturday.

The party congress also saw Marion Marechal-Le Pen, 24, the leader's niece and granddaughter of the party founder, top Saturday's ballot for the party's central committee, winning 80 percent of the vote, ahead of Florian Philippot, the group's deputy leader who is seen to represent a more liberal wing.

Marechal-Le Pen, whose blonde locks and broad face leave little doubt about her lineage, told BFM TV on Sunday that she backed her aunt and had no grand political ambitions, "above all none that would cast a shadow over her."

Le Pen painted both Sarkozy and Hollande as losers.

"You messed everything up," she said. "They gave you a treasure -- France -- and a diamond -- its people. You have ruined the one and abandoned the other".