Russian President Dmitry Medvedev, who was due to speak on Thursday at a political conference taking place at the club's stadium, expressed condolences to the relatives of the victims. 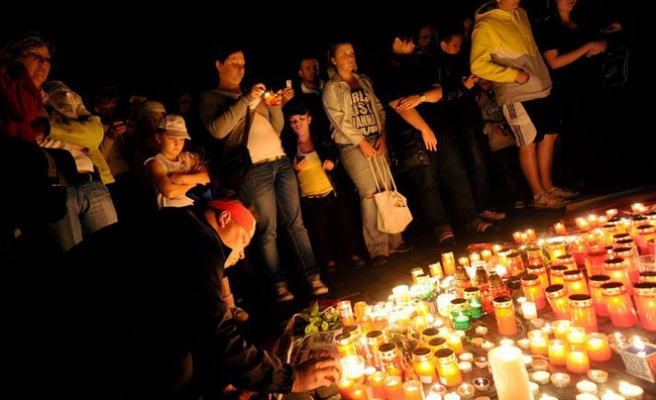 Candles flickered beside mounds of red carnations at the stadium of one of Russia's top ice hockey teams on Thursday after almost the entire team was wiped out in a plane crash that killed 43 people.

Fans and players across the world paid tribute to the Lokomotiv Yaroslavl team, the day after the Soviet-designed Yak-42 passenger plane slammed into a river bank just outside Yaroslavl, 250 km (150 miles) north of Moscow.

Many fans flocked to the stadium soon after the crash and left team scarves as well as flowers beside the stadium wall. Some were in tears. Others chanted the names of the players before going home late on Wednesday evening.

"Tears on the ice," Russia's popular Tvoi Den newspaper said on its front page under a picture of the squad on the ice. "Yet another terrible air crash has shaken Russia," it said.

Russian President Dmitry Medvedev, who was due to speak on Thursday at a political conference taking place at the club's stadium, expressed condolences to the relatives of the victims.

"Lokomotiv fans are grieving, the whole country is grieving," said Medvedev, who was expected to visit the crash site.

Condolences also poured in from abroad after the crash, which raised concerns about the safety of Russia's ageing fleet of passenger planes.

Only one of the 37 players and team officials on board survived the disaster, reviving memories of a plane crash in 1958 which killed many of English soccer club Manchester United's players.

Emergency workers quoted by Russian news agencies said they were still searching the waters of the Volga River where the plane crashed.

Two people survived but were in a grave condition.

The player who survived was offenseman Alexander Galimov, who hospital doctors said had burns over 90 percent of his body. The other survivor, one of the eight crew on board, was also in critical condition.

Witnesses including fishermen on the Volga River said they heard loud bangs as the plane crashed into the ground, bursting into flames, soon after take off.

Russian investigators said they believed the crash was caused either by faulty equipment or pilot error, although weather conditions were excellent.

The team has been on its way to a match in Minsk, the capital of Belarus.