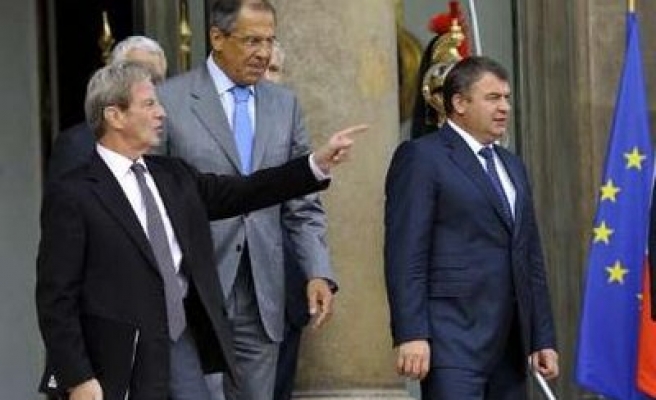 Russia remains in exclusive talks with France over the purchase of French Mistral helicopter carriers despite the launch of an international tender last month, Russian Foreign Minister Sergei Lavrov said on Tuesday.

"There is no change in the position of President (Dmitry) Medvedev in March, when he said there would be exclusive negotiations on the Mistral," Lavrov told reporters in Paris.

Moscow wants Mistral class warships to modernise hardware exposed as outdated during its war against Georgia in 2008.

France has said it is willing to sell the ships, but talks have got bogged down over technology sharing and where they would be built. Some NATO allies have voiced concern and urged Paris not to sell Moscow high-tech systems that could be used against Russia's ex-communist neighbours.

Lavrov was speaking after a biannual Franco-Russian meeting of foreign and defence ministers on military cooperation.

The ministers also met President Nicolas Sarkozy, whose office said talks on the Mistral were encouraging.

"We are continuing our discussions with a great deal of confidence," an Elysee official told reporters.

Russia had been in talks for months over the helicopter carriers, which are built by French naval shipyard DCNS, owned by defence electronics group Thales. Sarkozy said in July he was "certain" France would build the two ships.

But the sale appeared in question in August after Russian Defence Minister Anatoly Serdyukov announced he was opening the deal up to international tender.

Lavrov said the country's legal requirements meant any mass purchase by the government must be put out to tender.

French Foreign Minister Bernard Kouchner said a delegation visited Russia a week ago to push ahead with talks, and the Russians had given their response at Tuesday's meeting.

Russia has said that if it had had the Mistral during its 2008 war with Georgia, it would have achieved its military goal in 40 minutes instead of 26 hours.

However, the potential sale by France of one or more of the 400-500 million euro ($482-602 million) carriers has alarmed Washington and some eastern European NATO nations.

Neither minister would comment on possible objections from NATO or Washington, nor give a timeframe for sealing the deal.