Russia says ready to ratify nuclear pact, puts doubt on US side

Russia is ready to ratify a nuclear arms pact with U.S. this year but START could face problems in the U.S. Senate, the Russian speaker of parliament said. 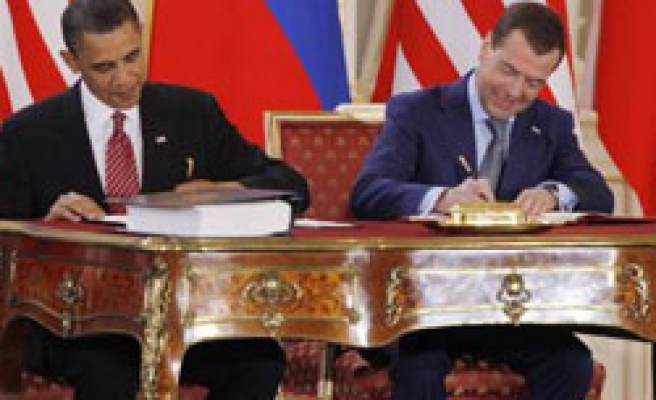 Russia is ready to ratify a nuclear arms pact with the United States this year but the landmark treaty could face problems in the U.S. Senate, the Kremlin-backed speaker of parliament said on Tuesday.

Speaker Boris Gryzlov's comments were a fresh indication that the Russian parliament is unlikely to ratify the new START treaty signed by Presidents Barack Obama and Dmitry Medvedev in April until approval in the U.S. Senate appears certain.

"From a technical point of view there is every opportunity to complete this process by the end of the year," Gryzlov said in opening remarks at the autumn session of the State Duma, the lower house of parliament.

"However, the American Senate is operating in the conditions of an election campaign, which could affect ratification procedures on the American side," said Gryzlov, a leader of Prime Minister Vladimir Putin's ruling United Russia party.

In May, Medvedev told United Russia leaders the Duma should ratify the treaty at the same time as the U.S. Senate, but not a moment earlier or later.

The treaty, which would cut the number of deployed warheads allowed to each of the former Cold War foes by about 30 percent, is the most prominent product of efforts by Obama and Medvedev to "reset" badly frayed relations.

Failure to ratify the treaty could undermine improvements in Russia-U.S. ties and hurt both Obama and Medvedev before presidential elections in both countries in 2012.

Ratification requires 67 votes in the 100-seat U.S. Senate, and Republican criticism has increased as partisan rhetoric heats up before Nov. 2 congressional elections.