Russia says there is still a chance for peace in Syria 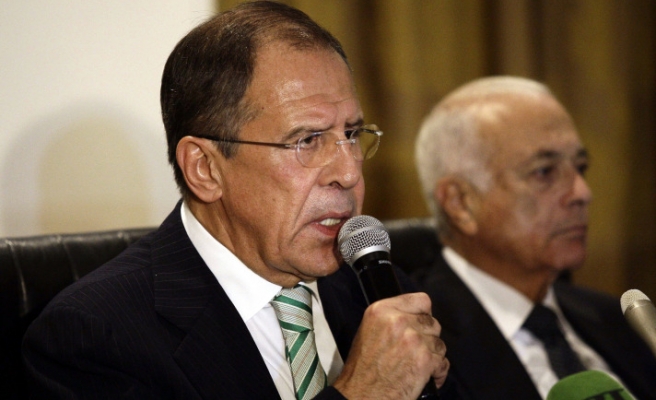 There is still a chance for peace in Syria and the world must not let it pass, Russian Foreign Minister Sergei Lavrov said on Thursday as he prepared for talks with the United States on a plan to secure Syria's chemical weapons.

During a visit to Kazakhstan, Lavrov welcomed the Syrian government's acceptance of Russia's proposal that it place its chemical arsenal under international control following an Aug. 21 poison gas attack in Syria's civil war.

"I am certain that there's a chance for peace in Syria," he said, adding a warning to U.S. President Barack Obama that military intervention in response to the chemical attack would further destabilise Syria and the wider region.

"Serious politicians cannot fail to understand the ruinousness of this plan," Lavrov said of potential air strikes in a meeting with students in Kazakhstan's capital, Astana.

Lavrov was to meet U.S. Secretary of State John Kerry later on Thursday to discuss the proposal, which has prompted Obama to ask Congress to postpone a vote to authorise a strike to punish Assad for the chemical attack that he blames on his government.

Russia said it had handed an "effective, clear, concrete" plan for securing Syrian chemical weapons to U.S. officials on Tuesday for review.

Citing a Russian diplomatic source, the Russian daily Kommersant reported that the four-stage plan would begin with Syria joining the global Organisation for the Prohibition of Chemical Weapons (OPCW).

Damascus would then declare its chemical weapons production and storage sites and allow OPCW inspectors to visit them, the newspaper cited the source as saying.

In the fourth stage, Syria would "decide, along with the inspectors, how and by whom the chemical weapons will be destroyed", it said.

The source said it was not clear who would destroy the weapons but that it was possible the United States and Russia would do it together, Kommersant reported.

Russia Foreign Ministry officials declined immediate comment on details of the plan or on the Kommersant report, which described the same actions Russian officials have said Syria would need to take under the proposal announced on Monday.

"It is undoubtedly necessary to provide for Syria to join the Chemical Weapons Convention, which would envisage Syria declaring its chemical weapons storage sites, revealing its chemical program," Lavrov said earlier on Thursday.

"On this basis, experts would determine what concrete measures must be taken to secure these sites."

According to Kommersant, if the United States accepts the plan, U.N. Secretary General Ban Ki-moon could make a statement supporting it and a resolution introduced to the U.N. Security Council.

Moscow believes the resolution "should not contain ultimatums or threats of force," Kommersant said, underscoring Russia's resistance to using the Security Council, where it holds veto power, to put pressure on Damascus.

Russia has been Assad's most powerful backer during the civil war that has killed more than 100,000 people since 2011, delivering arms and - with China - blocking three Security Council resolutions meant to pressure Assad.

An initial French draft resolution called for delivering an ultimatum to Assad's government to give up its chemical arsenal or face punitive measures. Russia has said that text is unacceptable.