Wildfires blanketed the capital with toxic smoke amid Russia's worst heatwave in over a century. 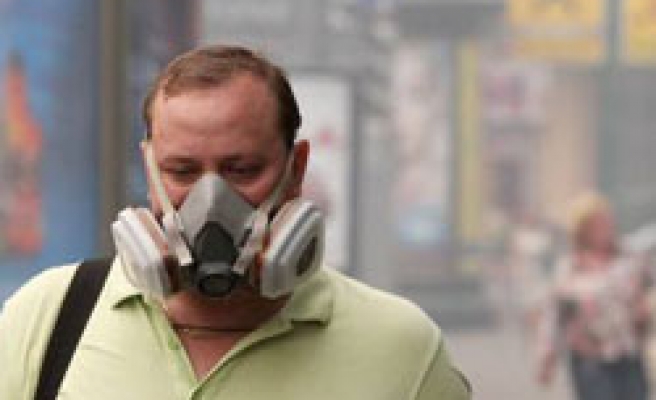 Scorching heat and acrid smoke have nearly doubled death rates in Moscow, a city official said on Monday as a shroud of smog from raging forest and peat fires beset Russia's capital for a third week.

"The average death rate in the city during normal times is between 360 and 380 people per day. Today, we are around 700," Andrei Seltsovsky, Moscow's health department chief, told a city government meeting.

Russia's worst drought in decades has spooked world grain markets, driving wheat prices up at the swiftest rate in more than 30 years and raising the spectre of a food crisis.

Seltsovsky said heat stroke was the main cause of the recent increase in deaths. Ambulance calls in Moscow were up by about a quarter to 10,000 a day and problems linked to heart disease, bronchial asthma and strokes had increased.

"This is no secret," Seltsovsky said. "Everyone thinks we're making secrets out of it. It's 40 degrees (Celsius, or 104 Fahrenheit) on the street. Abroad, people drown like flies and no one asks questions."

Until Monday, neither federal nor Moscow authorities had announced data on deaths from heat and pollution, giving rise to suspicion of a Soviet-style cover-up in the face of criticism of the government's handling of the wildfire crisis.

Officials say 52 people have been killed by fires that have ravaged forests and fields and destroyed a handful of villages since late July.

Prime Minister Vladimir Putin last week announced a grain export ban from Aug. 15 to Dec. 31, sending prices higher and hurting the shares of brewers such as Carlsberg and Heineken.

SovEcon, a leading agricultural analyst, said on Monday that Russia's wheat crop might be about one-third smaller than last year's -- dropping to 43 million tonnes from 61.7 million tonnes in 2009.

Russia's main sugar lobby warned on Monday that the drought may hamper this year's beet sugar output, reducing it from the earlier expected 4 million tonnes to 3.2-3.5 million tonnes.

The downgraded sugar beet forecast is not expect to change Russia's import needs as it has large domestic reserves. Almost all sugar produced in Russia is consumed domestically.

Kremlin critics have blamed Prime Minister Vladimir Putin for what they call a sluggish and ineffective government response to the fires, but polls have so far shown no decline in his popularity.

Russia has begun to feel economic effects from the horrid weather conditions, which have prompted banks and businesses to reduce staffing and slowed activity in the service sector.

According to the business daily Kommersant, investment bank Uralsib shortened its workday on Monday, and state-controlled behemoth Sberbank closed some of its back offices.

But many Muscovites did report for work, trudging to metro stations or driving on streets where visibility was far below normal and smog veiled buildings.

Many people wore facemasks to try to filter the smoke, but the masks were increasingly hard to find and some doctors raised concerns about an official whitewash of the real impact of the smoke in Moscow.

An unnamed doctor at a Moscow clinic wrote on his Internet site over the weekend that he was wary of diagnosing patients with heat- and smoke-related illnesses for fear of dismissal.

Another doctor at a major hospital, speaking on condition of anonymity, told Reuters on Sunday that senior management had instructed staff not to link patients' illnesses with the heat.

Seltsovsky said that the Moscow authorities had instructed all health clinics in the city to remain open on weekends and that as of Monday morning, they had ordered that 3.2 million face masks be issued for the capital.

Moscow authorities said over the weekend that shelters were operating city-wide as refuges from the heat. But Vitaly Bredikhin, deputy manager of one of the centres, said that around 90 percent of the shelters lacked air-conditioning.

At one of the shelters, in an old building near Pushkin Square in the centre of the city, about 10 elderly people sat in a hot dining room with no air-conditioning or even a fan.