Russia and the West are locked in the most serious confrontation since the end of the Cold War over influence in the former Soviet republic, a major commodities exporter and strategic link between East and West. 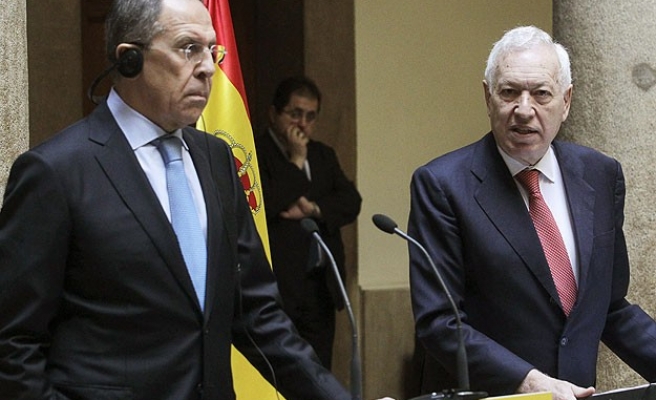 Russia said on Wednesday it could not order "self-defence" forces in Ukraine's Crimea region back to their bases ahead of crucial ministerial talks in Paris aimed at easing tensions of over Ukraine and averting the risk of war.

The European Union meanwhile offered Ukraine's new pro-Western government 11 billion euros in financial aid in the next couple of years provided Kiev reaches a deal with the International Monetary Fund.

Russia and the West are locked in the most serious confrontation since the end of the Cold War over influence in the former Soviet republic, a major commodities exporter and strategic link between East and West.

Ukraine pulled out of a trade deal with the EU under Russian pressure last year, sparking months of protests in Kiev and the Feb. 22 ouster of President Viktor Yanukovich, a Russian ally.

Russia has effectively occupied Crimea, where its Black Sea fleet is based, raising international tensions and provoking sharp falls in financial markets on Monday, although they have since stabilised.

Speaking before meeting U.S. Secretary of State John Kerry and other Western ministers in Paris, Russian Foreign Minister Sergei Lavrov repeated Moscow's assertion - ridiculed by the West - that the troops that have seized control of the Black Sea peninsula are not under Russian command.

Asked whether Moscow would order forces in Crimea back to their bases, Lavrov told a questioner in Madrid: "If you mean the self-defence units created by the inhabitants of Crimea, we give them no orders, they take no orders from us.

"As for the military personnel of the Black Sea Fleet, they are in their deployment sites. Yes, additional vigilance measures were taken to safeguard the sites... We will do everything not to allow any bloodshed."

Russia did not attend a meeting with Kerry, British Foreign Secretary William Hague and Ukrainian Foreign Minister Andriy Deshchytsia of the so-called Budapest group created to assure Ukraine's security after it abandoned nuclear weapons in 1994.

But Kerry and Hague said they would try to bring the Russian and Ukrainian ministers together later in the day.

Poland's foreign minister tweeted that he would attend a meeting in Paris with those two ministers plus the United States, Germany, Britain, France and the Organisation for Security and Cooperation in Europe (OSCE).

There was no immediate confirmation that all sides would attend the French-brokered session, which could be the first step towards a diplomatic mediation process.

Lavrov was later due to hold the first face-to-face talks with his U.S. counterpart since the crisis escalated, on the sidelines of a conference on Lebanon attended by the five permanent members of the U.N. Security Council.

NATO and Russia planned parallel talks in Brussels amid concerns that a standoff between Russian and Ukrainian forces in Crimea could still spark violence, or that Moscow could also intervene in Russian-speaking eastern Ukraine.

The West is pushing for Russia to return troops to barracks, accept international monitors in Crimea and Ukraine and negotiate a solution to the crisis through a "contact group" probably under the auspices of a pan-European security body.

France said European Union leaders meeting in Brussels on Thursday could decide on sanctions against Russia if there is no "de-escalation" by then. Other EU countries, including Germany, are more reticent about sanctions.

President Vladimir Putin on Tuesday defended Russia's actions in Crimea, which used to be Russian territory, and said he would use force only as a last resort.

This eased market fears of a war over the former Soviet republic after sharp falls on Monday, although Russian shares and the rouble slipped again on Wednesday and Ukraine's hryvnia dropped against the dollar.

Russian forces remain in control of Crimea, where Interfax reported they seized control of two Ukrainian missile defence sites overnight, and Putin gave no sign of backing down.

"What he wants above all is a new empire, like the USSR but called Russia," former Ukrainian President Viktor Yushchenko told France's Europe 1 radio.

In Brussels, European Commission President Jose Manuel Barroso said the EU would deliver assistance to Kiev in coordination with the European Bank for Reconstruction and Development and the European Investment Bank.

Some of it would be contingent on Ukraine signing an IMF loan deal, which will require painful economic reforms such as ending domestic gas subsidies and letting the hryvnia float.

"The package combined could bring an overall support of at least 11 billion euros over the next couple of years, from the EU budget and EU-based international financial institutions," Barroso told a news conference. The United States offered Ukraine $1 billion in loan guarantees on Tuesday.

U.S. President Barack Obama acknowledged that Russia had legitimate interests in Ukraine but said that did not give Putin the right to intervene militarily.

A senior administration official said Obama spoke to German Chancellor Angela Merkel and discussed a potential resolution to the crisis. The Russian-speaking German leader has good relations with the German-speaking Putin, and Berlin is Russia's biggest economic partner.

The official said Obama, in his phone call with Putin last Saturday, had discussed what officials called an "off-ramp" to the crisis in which Russia would pull its forces in Crimea back to their bases and allow international monitors to ensure that the rights of ethnic Russians are protected.

At his first news conference since the crisis began, Putin said on Tuesday that Russia reserved the right to use all options to protect compatriots who were living in "terror" in Ukraine but that force was not needed for now.

French President Francois Hollande raised the possibility of sanctions if Putin does not step back and accept mediation, taking a tougher public line than Merkel, who has avoided talk of sanctions so far.

French Foreign Minister Laurent Fabius said early measures could include restrictions on visas, the assets of individuals and existing discussions on economic ties with Russia.

Putin told his cabinet on Wednesday he did not want political tension to detract from economic cooperation with Russia's "traditional partners". But the Russian Information Agency said Moscow was preparing counter-measures against Western firms if necessary.

A senior U.S. official said Washington was ready to impose sanctions in days rather than weeks.

Canadian Prime Minister Stephen Harper said after speaking to Obama at the weekend that the Group of Seven leading industrialised nations were considering meeting in the near future, a move that would pointedly exclude Russia. The G7 became the G8 in 1998 when Russia was formally included.

Lavrov told European Union foreign policy chief Catherine Ashton that an EU-brokered agreement signed by political leaders in Kiev on Feb. 21 should be the basis for stabilising the situation in Ukraine, his ministry said on Wednesday.

He said the agreement foresaw constitutional reform which would take into account the wishes of all regions in Ukraine. Russia says the deal was broken by the removal of Yanukovich.

No major incidents were reported in Crimea on Wednesday and Ukraine's top security official said he hoped the crisis could be ended soon.