Senior Kogalymavia executive says that 'no technical failures' could account for why Airbus 321 would have broken up in mid-air, as investigators have said happened 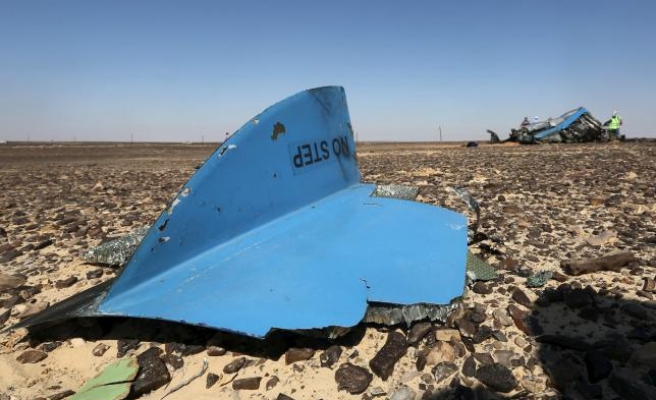 The Russian passenger jet that crashed in Egypt killing all 224 people on board came down due to "external" factors, the airline said Monday, as relatives began identifying their loved ones in Saint Petersburg.

Senior Kogalymavia executive Alexander Smirnov said that "no technical failures" could account for why the Airbus 321 would have broken up in mid-air, as investigators have said happened.

"The only explanation is some kind of external action," Smirnov told a news conference in Moscow, without elaborating, adding that the doomed jet was in "excellent technical condition".

Both Cairo and Moscow have played down the claim from Egypt's ISIL branch that it brought down the aircraft flown by Kogalymavia between holiday destination Sharm el-Sheikh and Russia's second largest city on Saturday.

Investigators are examining all possible causes as they comb the remote crash site in the Sinai peninsula as part of an Egyptian-led probe into the disaster that also involves experts from Russia, Airbus, and Ireland, where the aircraft was registered.

President Vladimir Putin described the crash, Russia's worst air disaster, as a "huge tragedy" in his first comment since Saturday's catastrophe at a meeting with the country's transport minister Monday.

"Without any doubt everything must be done to create an objective picture of events so that we know what happened and can react accordingly," Putin said.

The Kremlin said the Russian president did not intend to visit the relatives for the time being.

The head of Russia's aviation authority Alexander Neradko slammed the airline's claims that external factors were to blame as "premature and not based on any real facts" in televised comments.

Kremlin spokesman Dmitry Peskov said Moscow "cannot exclude any version" of what caused the crash as investigations were still ongoing, but warned against "guessing" at the reason.

Russia has a dismal air safety record, and while larger carriers have begun upgrading ageing fleets, the crash is likely to raise concerns about smaller airlines such as Kogalymavia.

The company's executive Smirnov said the firm ruled out a technical fault or human error and said the plane had sustained "significant damage to its construction that did not allow it to continue the flight."

"The crew totally lost control and for that reason there was not one attempt to get in contact and report on the accident situation on board," Smirnov said.

The plane was "flying out of control -- that is, it wasn't flying, it was falling," he said.

The claims by the airline came as relatives of those who died in the crash began the painful process of identifying their loved ones after a first plane delivered the remains of 140 victims to Saint Petersburg.

"The process of identification has begun. It is complex, meticulous work," Saint Petersburg deputy governor Igor Albin told journalists outside the crematorium where the remains are being stored.

Cars meanwhile ferried relatives of the dead -- overwhelmingly Russian holidaymakers from the Saint Petersburg area -- to the facility.

Family members had already been providing DNA samples at a crisis centre set up close to Saint Petersburg's Pulkovo airport, now the site of an impromptu memorial where people have brought flowers and cuddly toys to commemorate the victims, many of them children.

Russian officials said that a second plane was set to repatriate more bodies later Monday evening, but did not say how many.

Saint Petersburg was observing a second day of mourning for those who were lost in the crash.

Investigators in the Egyptian-led probe returned to the vast crash site on Monday, an official told AFP, without giving the nationalities of those involved.

The crash site in the Wadi al-Zolomat area of North Sinai was littered with blackened aircraft parts and the smell of burnt metal lingered on Sunday.

Russia's emergencies ministry said that it hoped its crews would complete their search mission at the remote location Monday evening.

A representative of the ministry told Russian news agencies that investigators had so far found 12 segments of the plane's fuselage and personal belongings.

Egyptian authorities said that investigators from the probe team are currently examining the "black box" on-board recorders from the doomed jet in Cairo.

Analysts have dismissed claims that the jet could have been shot down by ISIL-affiliated groups in the region if it was flying at its cruising height of 30,000 feet (9,000 metres), but did not rule out that a bomb might have been planted on board.