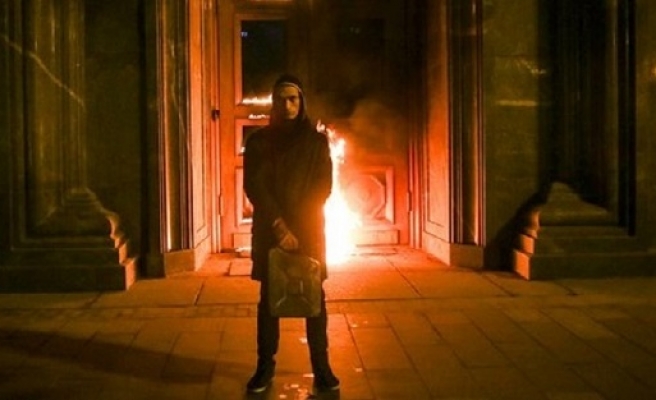 Russian authorities on Monday detained a political performance artist best known for nailing his scrotum to Red Square after he torched the doors to the headquarters of the FSB security service, the successor to the KGB.

Pyotr Pavlensky set fire to the wooden doors of the sprawling FSB building in downtown Moscow around 1:00am (Sunday 2200 GMT), his lawyer Olga Chavdar told AFP from the Moscow police station where he was being held.

A video posted online shows flames leaping to the top of the doorway as Pavlensky stands in front of it holding a petrol canister, before a policeman comes running up.

The video titled "The Burning Door of the Lubyanka" -- referring to the popular name for the symbolic security service headquarters -- was uploaded on the internet.

In a message released along with the video, Pavlensky said: "The FSB acts using a method of unending terror and holds power over 146 million people."

The FSB headquarters, which take up an entire block, were used by Soviet-era secret police for interrogations, jailing opponents and extra-judicial killings.

President Vladimir Putin briefly headed the FSB and was a KGB agent in East Germany during the Soviet era.

Pavlensky's lawyer said the FSB questioned the activist and asked him whether he had intended to kill anyone.

"He was detained at 1:00am after which he was in the FSB headquarters, where they insistently asked him whose death he wanted," she said.

"He told them 'What are you saying? I don't want anyone's death'," she said.

Chavdar said it was unclear what charges Pavlensky could face but suggested "they could charge him with arson", for which he could be imprisoned for up to five years.

"I think it will be a criminal case, everything points to that. It's hard to say what charge: anything can happen in our country," the lawyer said.

In his statement, Pavlensky accused the FSB of "terrorism" and said that "the threat of inevitable reprisals hangs over everyone within the range of security cameras, phone-tapping and passport control borders."

He called the act a "reflex to fight for my own life."

Two journalists who watched were questioned before being released, reported the Dozhd independent channel, whose journalist was at the scene.

Pavlensky in 2013 stripped naked and nailed his scrotum to the cobblestones of Red Square to protest against tight police control. The case was eventually closed due to the lack of any crime.

He has been charged with vandalism and faces up to three years in jail for another performance called Freedom, held in Saint Petersburg last year.

During that action, he and other activists set fire to tyres and waved a Ukrainian flag to simulate the Maidan protests in Kyiv that led to the ouster of a pro-Moscow leader.

In other shocking performances to highlight a lack of civil freedoms, Pavlensky has sewn up his lips, wrapped himself in barbed wire and cut off part of his earlobe.

Russian artists who carry out political stunts usually face up to 15 days in police cells for petty hooliganism, but depending on how their actions are interpreted, can face much higher sentences.

Two members of Pussy Riot in 2012 were sentenced for two years for hooliganism after their performance in a church protesting against close ties between the Russian Orthodox Church and Putin.