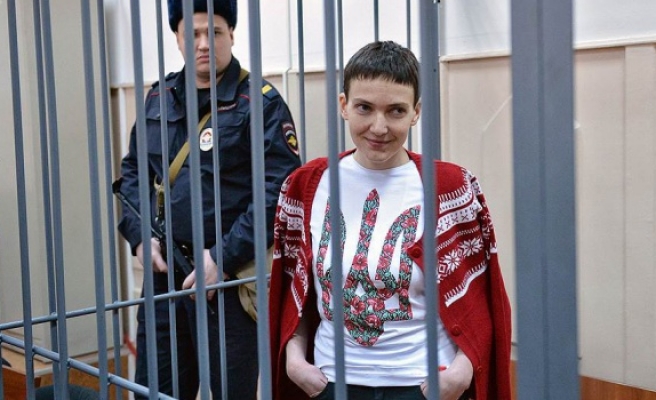 A court in southern Russia on Monday found Ukrainian pilot Nadiya Savchenko guilty of murder over the killing of two Russian journalists in war-torn east Ukraine, at a trial condemned by Kyiv and the West as a political sham.

Savchenko "committed the premeditated murder as part of a group of people from the motives of hatred and enmity," a judge in the town of Donetsk was quoted as saying by Russian news agencies.

Noteworthy, Russian news agencies have reported on the final verdict before the judge announced that Savchenko was found guilty.

The verdict said that Savchenko -- who denies all the charges -- was motivated by hatred towards "Russian-speaking people in general", agencies reported.

Prosecutors are demanding 23 years in jail for the 34-year-old combat helicopter pilot -- who was serving in a pro-Kyiv volunteer battalion fighting Russian-backed separatists in eastern Ukraine --  with sentencing set to last until Tuesday.

Savchenko was also found guilty on a charge of illegally crossing the border into Russia, reports said.

Savchenko -- who has become a national hero at home and been elected to parliament in absentia -- insists she was kidnapped by pro-Moscow separatists in eastern Ukraine in June 2014 and illegally smuggled over the border into Russia before being slapped with false charges.

Ukraine and its Western allies see Savchenko's case as a political show trial and insist she is the latest pawn in the Kremlin's broader aggression against its ex-Soviet neighbour that saw Moscow seize the Crimea peninsula and fuel a separatist insurgency.

But authorities in Russia have insisted she was the "spotter" in the fatal shelling of Russian state journalists Igor Kornelyuk and Anton Voloshin.