Russia has unleashed cruise missile strikes from the Caspian to cover the ground offensive in Syria. 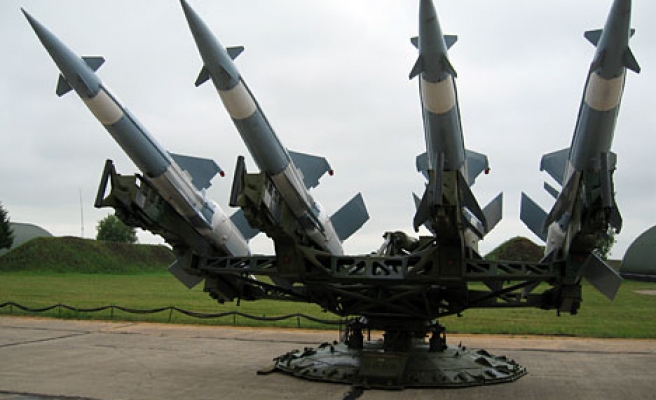 Russia dramatically escalated its air war in Syria on Wednesday, unleashing heavy bombardments and cruise missile strikes from the Caspian Sea as cover for a major Syrian army ground offensive.

Russian President Vladimir Putin said Moscow had begun synchronising its strikes with the army's ground movements against rebels, as the Kremlin voiced willingness to make contact with Western-backed fighters that Washington and its allies accuse it of targeting.

Putin, who turned 63 on Wednesday, said Russian warships had fired cruisemissiles on Islamic State group positions in Syria for the first time.

A video map released by Russia's defence ministry showed the missiles launched from warships in the southern Caspian Sea and flying close to 1,500 kilometres (930 miles) through Iranian and Iraqi airspace before hitting targets in Syria.

The Syrian Observatory for Human Rights reported at least 40 Russian air strikes in Hama and neighbouring Idlib province, which is controlled by the powerful Army of Conquest alliance that includes Al-Qaeda affiliate Al-Nusra Front.

The alliance has sought to expand into Hama from Idlib and seize high ground to target the neighbouring regime stronghold of Latakia province.

The Britain-based Observatory said "many raids, believed to be from Russian warplanes, killed six people" including two children in Maraat al-Numan in Idlib.

A military source in Hama told AFP that "the Syrian army in its latest operations is working on cutting off the southern parts of Idlib province from the northern parts of Hama province."

He added that the operations were also intended to begin securing the major highway between Aleppo and Damascus.

Putin said Russian strikes would "be synchronised with the actions of the Syrian army on the ground" to support the regime's offensive operations.

AFP has concluded after a careful reading of Russia's video map that at least one cruise missile struck near the IS-held city of Al-Bab in Aleppo province, while several others appeared to head towards targets in Idlib.

Russia says its forces have hit 112 targets since its operations in Syria -- which it insists target IS and other "terrorist groups" -- began on September 30.

But Syrian rebels and their backers say a range of opposition fighters, not just jihadists, have been hit.

In Washington, State Department spokesman John Kirby said: "Greater than 90 percent of the (Russian) strikes that we've seen them take to date have not been against ISIL or Al-Qaeda-affiliated terrorists.

"They've been largely against opposition groups that want a better future for Syria and don't want to see the Assad regime stay in power."

Adding to growing concern in the West about Russia's motives and actions in Syria, Turkey's Prime Minister Ahmet Davutoglu alleged that just two out of 57 Russian strikes examined by Turkish intelligence had hit IS.

The Russian campaign has particularly raised hackles in Ankara, which accuses Moscow of violating its airspace from Syria on at least two occasions over the weekend.

It also reported a violation by a MIG-29 jet of unknown nationality on Monday.

Turkey has protested the violations, backed by the NATO alliance to which it belongs, and warned Russia against losing its friendship with Ankara, which has been severely tested over Syria.

Tensions between Russia and the United States also escalated, with Defence Secretary Ashton Carter insisting that Washington is not cooperating with Russia over its air campaign.

"I have said before that we believed that Russia has the wrong strategy –- they continue to hit targets that are not ISIL. We believe this is a fundamental mistake," Carter told a press conference in Rome, referring to IS by an alternative acronym.

A Pentagon spokesman said US-led coalition aircraft had been re-routed on at least one occasion to avoid any confrontation with Russian warplanes over Syria.

"If we leave these religious clashes between Sunnis and Shiites, they will grow. Don't think we will be sheltered, this will be a total war," he said in a speech to the European Parliament.

Putin said Hollande had proposed "to at least try to unite the efforts of the government troops of President Assad's army and the so-called (rebel) Free Syrian Army," but a member of Hollande's entourage quickly rebutted that claim.

Moscow's foreign ministry also said it was ready to make contact with the FSA, a group whose existence it previously questioned.