Western investors regarded Kudrin as a guarantor of financial stability and said his departure would be a heavy blow to Russia's economy, setting back prospects for reforms. 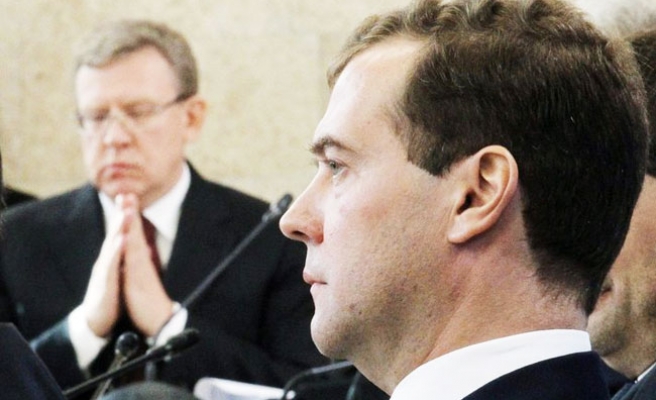 Russian Finance Minister Alexei Kudrin was ousted on Monday in a bitter and public conflict with President Dmitry Medvedev that has exposed deep cracks in unity over Vladimir Putin's plan to return to the Kremlin.

Western investors regarded Kudrin as a guarantor of financial stability and said his departure would be a heavy blow to Russia's economy, setting back prospects for reforms.

"I have resigned. My resignation was accepted," Kudrin told Reuters after the sudden end to his more than 11-year tenure as finance minister, a departure from Putin's script when he announced on Saturday he would run for president in March.

Kudrin, a close Putin ally who appeared to be frustrated at not being offered the premiership under the succession plan, was left with little option but to resign.

He may have particularly irked Putin by breaking ranks while in Washington for talks on the global economy because the prime minister has saved some of his fiercest rhetoric for the United States, Russia's former cold war enemy.

The president also surprised and humiliated him by demanding he quit at a meeting with local officials after Kudrin said in Washington that he would not work under Medvedev if he swapped places with Putin to become prime minister next year.

"Such statements appear improper ... and can in no way be justified. Nobody has revoked discipline and subordination," Medvedev said in the Volga city of Dimitrovgrad, looking down from a stage at Kudrin who was sitting in the audience.

"If, Alexei Leonidovich, you disagree with the course of the president, there is only one course of action and you know it: to resign ... Naturally, it's necessary to answer here and now: Will you write a resignation letter?"

Kudrin, who said on Sunday he differed with Medvedev over economic policy and particularly his decision to increase military spending, looked stunned.

"Yes, it is indeed true that I have disagreements with you," he said, before promising to consult Putin on what to do and later offer Putin his resignation.

Such bitter political exchanges are rarely seen in public in Russia, where political life is usually orchestrated at the highest level and open dissent over policy is unusual.

Medvedev and Putin briefly differed over policy on Libya this year but the last open and bitter feud at such a high level was in 2004 when the then prime minister, Mikhail Kasyanov, fell out with Putin, who was president at the time.

Many economists had hoped Kudrin, who has been an ally of Putin since they worked together in the St Petersburg city administration in the 1990s, would not be forced out.

Kudrin won praise for building up a rainy-day fund from windfall oil and gas revenues which cushioned Russia during the global economic crisis in 2008 and has no obvious successor.

His tight-fisted policies have made him a target of ire for many Russians who want more public spending -- and also for the Communists, likely to be the closest rivals to Putin's United Russia party in a December parliamentary election.

Kudrin had been widely seen as the best qualified candidate to lead the government after the presidential election, overhaul the creaking pension system and reduce Russia's reliance on natural resources. Oil and gas revenues dominate the budget and leave Moscow vulnerable to swings in global energy prices.

"This is one of the most worrying developments so far," said Lilit Gevorgyan, a regional analyst at IHS Global Insight.

"Kudrin had been the one to be really pushing forward reforms, at least during Putin's first term. If he is gone, who will be doing that? Medvedev has talked of reforms but in fact he has barely done anything."

Medvedev's strident behaviour left Putin with a choice between backing the president or his trusted finance minister.

"Putin seems to have decided that Kudrin's head was a price to be paid to ensure his smooth succession back to the presidency," said Timothy Ash, emerging markets economist at Royal Bank of Scotland. "The market will now fear that relative fiscal prudence, for which Kudrin was seen as a linchpin, will go out of the window."

Kudrin's departure highlights the friction caused by Putin's announcement that he planned to return to the presidency after nearly four years as prime minister.

The former KGB spy's decision was intended to end uncertainty over who would be president next year that had been undermining Russia's economic performance. But Kudrin's dissent meant the facade of unity cracked less than 24 hours later.

Just how deep the cracks in unity go, and how much dissent Putin faces, is unclear. Most government and Kremlin officials kept a low profile on Monday. None rushed to side with Kudrin.

His removal sends a warning to anyone else considering rebelling. Many officials are now contemplating their future and where to put their allegiance because the centre of power will switch back to the Kremlin once Putin becomes president.

"In addition, the dismissal of the strongest representative of the liberal economic wing of the government may result in the strengthening of the 'siloviki' (security forces) influence," she said.

Medvedev, 46, and Putin, 58, have ruled the world's largest country and biggest energy producer in a power 'tandem' since Putin had to give up the presidency in 2008 after serving the maximum two consecutive terms.

Putin has continued to pull the strings under the deal and could serve until 2024 if he wins two successive six-year terms. He would by then have been in power for almost a quarter of a century.

Although opinion polls show both leaders are much more popular than any other Russian politicians, and Putin is all but certain to be elected in March, many Russians show signs of impatience with the lack of progress on democracy.

"How much more can you take? Yet again there will be nothing, everything will stay the same. We only get empty promises," said retired factory worker Nikolai, in the village of Titov northeast of Moscow.