Russian officers have as yet refused to comment on the situation, claiming that they are not authorized to comment. 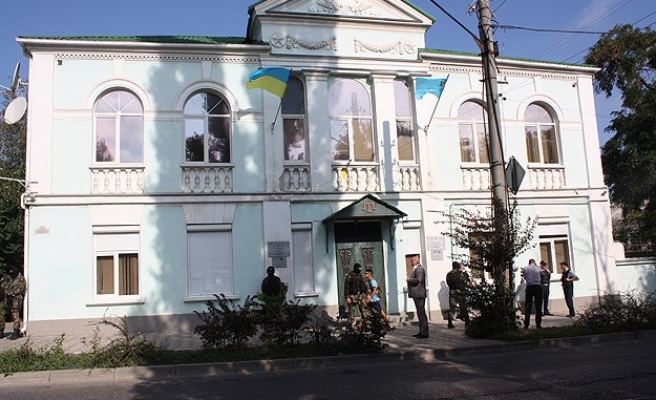 Masked, armed FSB officers and policemen who have encircled the Mejlis building in Simferopol have as yet refused to comment on the situation, claiming that they are not authorized to comment.

"I came to work shortly after 9.30 a.m. but the building was blocked by armed people in balaclavas and uniforms," Dilyaver Akiev, head of the secretariat of the assembly, or Mejlis, said by phone.

"They are not letting anyone in or out, they are assisted by regular police and the FSB (Federal Security Service) is carrying out searches inside," he said from Crimea's provincial capital Simferopol.

According to the Qirim News Agency, there is a search being conducted inside the building including a search of the editorial office of the Crimean Tatar Avdet newspaper, which is located in the Mejlis building.

Prisoner transport vehicles also reportedly arrived at the scene earlier this morning at the house of Eskender Bariev, a member of Mejlis. His home was searched for banned literature by armed FSB officers.

"The policy of mounting pressure on us, on the Mejlis and the community, continues and is growing in force," Akiev said. "That is to force us to conform with the new authorities, especially now after the elections.

"But we are not breaking any laws, there are no grounds for any searches," he added.

The incident comes a day after unknown masked men tore off Ukrainian flag from the Mejlis building.