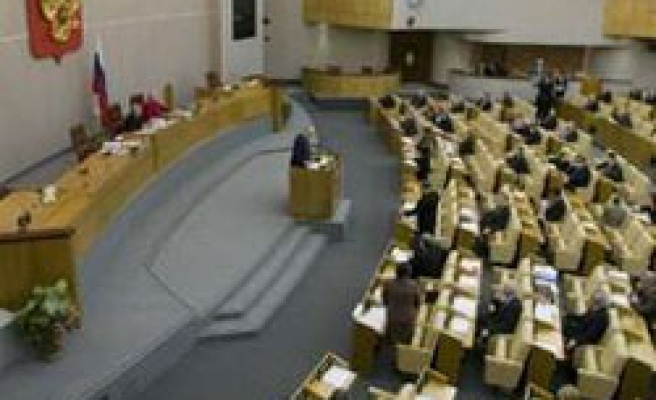 The Russian government rushed a law through parliament on Friday which will tighten controls on civil rights groups and has strained relations with the United States, which fears a crackdown on opponents of President Vladimir Putin.

In defiance of criticism this week from the U.S. State Department, curtly dismissed by Russia's Foreign Ministry as "gross interference", the lower house overwhelmingly backed the bill in second and third readings under accelerated procedures.

The rapid passage underlined the importance Putin attaches to a law which will force foreign-funded non-governmental organisations (NGOs) that engage in "political activity" to register with the Justice Ministry as "foreign agents" and to file a report on their operations to officials twice a year.

Critics say the term "foreign agents" echoes back to the Cold War, and that organisations which carry the tag will be seen by many Russians as traitors. They say it aims to starve such groups of funds and to intimidate them into silence.

"The law is harmful to the process of developing a civil society. It does not support the opening up of our country," Yelena Zhemkova, a director at Russian human rights group Memorial, told Reuters. "Put simply, this law has just one goal and that is to provide a formal reason for labelling your opponents enemies of the state."

Boris Nemtsov, a former minister and one of the organisers of protests against the president, said: "The law was inspired and pushed by Putin himself as a repressive law on rallies."

Putin, a former KGB spy, has been in power for 12 years as prime minister or president. He returned to the Kremlin in May and could rule the world's largest country for the next 12 years if he is re-elected in 2018.

In the past seven months he has faced the biggest protests since he first rose to power and he has already pushed through a law that increased potential fines for demonstrators, while police have raided the homes of some of the protest organisers.

Parliament is also considering a new law tightening controls on the Internet, used by the opposition for distributing news about protests, as well as legislation tightening defamation laws, which the opposition fears could also be used against it.

The U.S. State department expressed its "deep concern" about the NGO law on Wednesday but the Russian Foreign Ministry hit back shortly after the State Duma lower house approved the law.

In a response that showed the impact the bill is having on already frayed foreign relations, it said in a statement: "We note that such comments cannot be seen as anything other than entirely inappropriate attempts at gross interference in the activities of the Russian state authorities."

Putin's United Russia party says the law, which had its first reading in the Duma only a week ago is needed to protect openness about NGOs.

"This law is no limitation to anything whatsoever. It just makes information public so it is in the best interest of civil society and is not against anybody," the party's Irina Yarovaya, co-author of the bill, said before it was presented. "There is nothing derogatory in the phrase 'foreign agents'."

The second and third readings of the bill were rolled into one, and the law was approved with just three votes against. It will go into effect once the upper house has rubber stamped it and Putin has signed it into law.

Critics see it as part of a wider crackdown on civil liberties and the opposition movement protesting against Putin.

They say the law could put at risk the work of organisations such as Amnesty International, which campaigns for human rights, and Transparency International, a corruption watchdog.

The Russian rights group Golos, which receives foreign funding and compiled allegations of fraud in the parliamentary election won by United Russia last December, says it believes it is the prime target of the law.

The Moscow Helsinki Group, which has been monitoring human rights since Soviet times, has said it will give up all foreign funding once the law takes effect, but will not halt its work.

"The Duma, in some sort of extraordinary speedy mode, has been accepting laws lately, on the Internet and others, instead of dealing with real problems like the economic crisis," Memorial's Zhemkova said.

A U.S. State Department spokesman said on Wednesday that the United States had communicated its concern to Moscow over the law, which could make already chilly ties between the former Cold War enemies even frostier.

The United States places its own limits on foreign-funded groups on its own soil through the Foreign Agents Registration Act. It requires groups acting as the agents of foreign governments in a political capacity to disclose their activities and finances.

United Russia has highlighted similarities between the new law and legislation in the West, but the State Department said the Russian law goes further than its U.S. counterpart.

Putin accused Western governments last year of trying to influence the December election by funding NGOs in Russia, and Golos was accused in a television documentary of supporting opposition parties. Golos has denied this.

Putin once referred to NGOs as "jackals" because some of them count on foreign support. The Kremlin's advisory human rights council had called for passage of the new law to be delayed but Putin dismissed their calls.