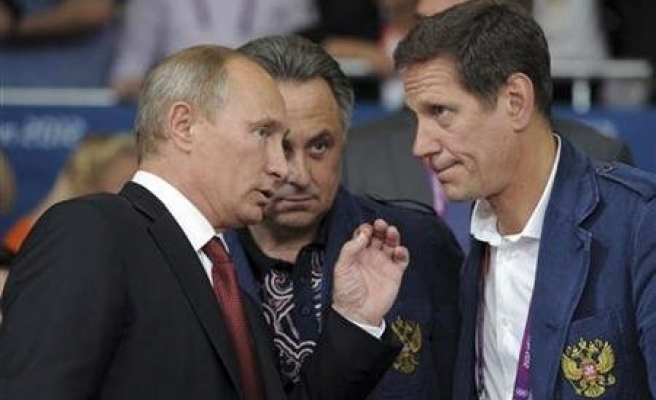 "The Brits are just as (bad) as (the Chinese) in Beijing," Mutko told Russian media on Saturday. "Here in London everyone wants the British to win. They have a very strong political support."

Mutko's comments on Saturday came as Russia faced the prospect of their worst finish on the medal table since they entered the 1952 Games as the Soviet Union. Since those Helsinki Games until 2004 the former Soviet Union and then Russia tussled with the United States to top the medal table.

They have been usurped by a strong showing from local athletes in London with Britain third on the table with 59 medals, 26 of which are gold. Russia have 19 gold medals and 70 in total with one day remaining.

Mutko had said before the London Games that "it would not be a national tragedy" if the 436-strong team finished fourth on the table.

The Russians, however, had high hopes for their strong boxing team before the Games, but Mutko singled out the sport as being particularly suspect.

"Three of our boxers had been prevented from reaching the final," Mutko said, referring to light flyweight David Ayrapetyan, flyweight Misha Aloian and welterweight Andrei Zamkovoy, who lost their semi-final bouts.

Mutko added that Britain's boxers may have benefited by a partisan home crowd swaying the judges.

"(The British) are planning a happy end in boxing tomorrow," he said after three British men advanced to Sunday's finals.

He also felt Sofya Ochigava, who lost to Ireland's Katie Taylor 10-8 in the women's lightweight final on Thursday, should have won the gold medal.

"She didn't deserve such a score," he said. "You have to be blind."

Boxing has been the subject of controversy in the past and at one time was in danger of being thrown out of the Olympics because of allegation of corruption in the sport.

The competition at the ExCel centre in London's Docklands has also seen its share of controversies when a Turkmen referee and an Azerbaijani official were expelled last week, while a German referee was suspended for five days.