The air pollution from the crisis rose to more than six times above normal. 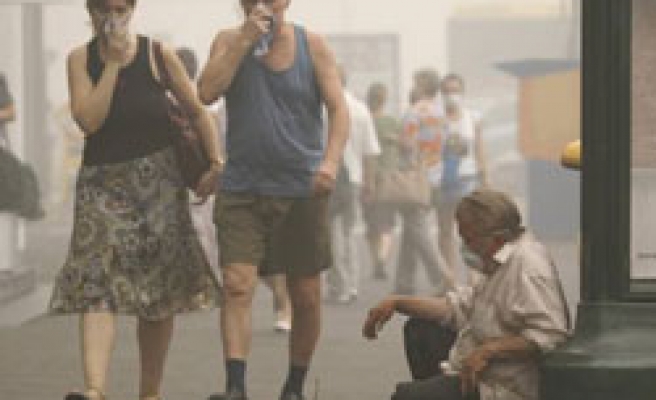 Russian troops dug a 8-km (5-mile) long canal to keep fires caused by a record heatwave away from a nuclear arms site, local media said on Saturday as air pollution from the crisis rose to more than six times above normal.

Forest and peat fires by the highest temperatures ever registered in Russia have killed at least 52 people, made more than 4,000 homeless, diverted many flights and forced Muscovites to wear surgical masks to filter out foul air.

"The fire situation in the Moscow region is still tense, but there is no danger either for residential areas or for economic sites," an Emergencies Ministry spokesman said.

Weather forecasts said the smoke, which has reached even underground metro stations, would persist until Wednesday.

Echo Moskvy radio station said army troops excavated the canal to prevent the flames from advancing into the Sarov nuclear arms facility, ringed by forest in the Niznhy Novgorod region around 350 kilometres (220 miles) east of Moscow.

The Emergencies Ministry said the situation in Sarov had "stabilised". Sarov is a closed town whose nuclear site produced the first Soviet atomic bomb in 1949 and remains the main nuclear design and production facility in Russia.

On Thursday, Russia's nuclear chief assured President Dmitry Medvedev that all explosive and radioactive material had been removed from the nuclear site as a precautionary measure.

Air pollution surged to more than six fold over the normal reading in Moscow, a city of 10.5 million, the highest sustained contamination since Russia's worst heatwave in over a century began a month ago, Moscow's pollution monitoring agency said.

Many people on the streets of Moscow were wearing masks to ward off the heavy smog, while suffering from sweltering heat as the temperature climbed to 36 Celsius (96.8 Fahrenheit), verging on the record high for the day.

Officials have urged Muscovites to stay indoors because of hazardous levels of carbon monoxide and fine particles in the air.

With visibility low, local media said air traffic was being diverted to Sheremetyevo airport, north of Moscow, where smog was not so dense as in other parts of the capital. Some flights have been rerouted as far away as Ukraine from Moscow.

Planes and helicopters involved in firefighting were temporarily grounded by the thick smoke.

One of the world's top grains producers, Russia has announced a temporary ban on exports after crops were ravaged by the dry weather. The news sent world wheat prices soaring.