Russian Special Forces fired into the air to disperse thousands of Crimean Tatars who had gathered at the Herson Armansk border crossing to greet leader Mustafa Jemilev with chants of 'Allahu Akbar'. 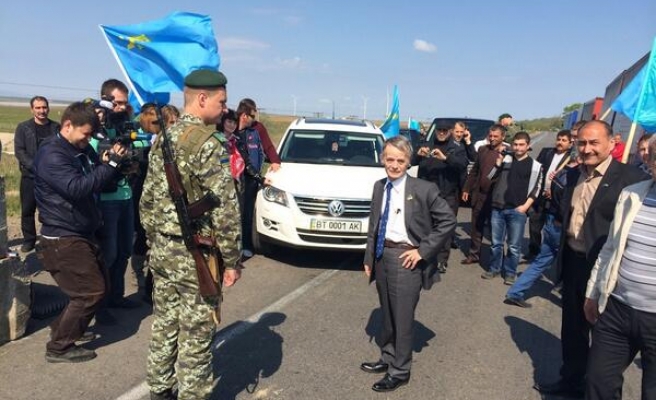 Crimean Tatar leader Mustafa Jemilev is attempting for the second day to enter his homeland after his entry to Crimea was denied on Friday due to the local Russian authorities barring him.

Jemilev, who attempted to fly to Crimea's Akmescit (Simferopol) airport from Moscow on Friday, was told to go back to the Ukrainian capital Kiev where he serves as an MP in the Ukrainian parliament. On Saturday, he attempted to enter his homeland via a border crossing.

According to Qirim News Agency, up to 1,000 cars carrying Crimean Tatars went to go greet Jemilev at the border, but were intercepted by 40 teams of Russian Special Forces. Emotional scenes followed when the Russian authorities once again forbid entry to the Crimean Tatar leader.

The thousands of Crimean Tatars who had come to greet their leader at the Herson Armansk border crossing began to cry out 'Allahu Akbar' (God is Great) chants as the Russians cut off their road. Crimean Tatar Mejlis (Parliament) head Refat Chubarov, who was also on the scene, called on his people to stand back in order to avoid bloodshed.

Russian Crimean Prime Minister Sergey Aksyonov said that the 70-year-old Jemilev had been banned from Crimea because he threatens of destabilize the region, claiming that Jemilev was being backed by Western spy agencies.