Russian forces in uniforms with no markings have surrounded Ukrainian bases in the occupied peninsula since they seized it last week, and the region's Russian separatist leadership has ordered the Ukrainians to surrender. 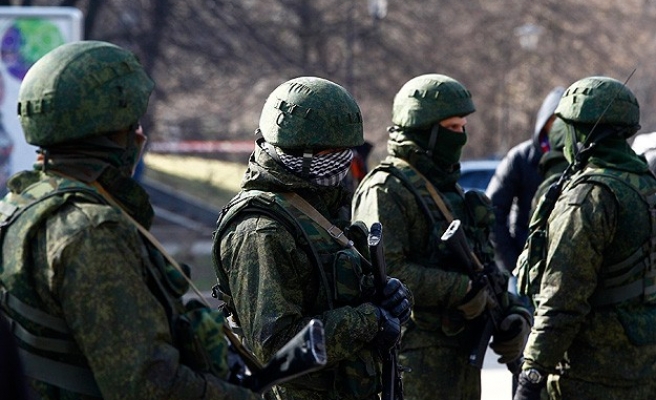 Ukraine's border guards said on Saturday some of their men had been evicted from an outpost in eastern Crimea by Russian soldiers, who seized their apartments and forced them out in the middle of the night with their families.

It was not immediately possible independently to confirm the report, the latest confrontation between Russian troops who seized the Black Sea peninsula last week and the detachments of Ukrainians who remain there.

Russian forces in uniforms with no markings have surrounded Ukrainian bases in the occupied peninsula since they seized it last week, and the region's Russian separatist leadership has ordered the Ukrainians to surrender.

So far there has been no shooting, but standoffs at bases have become increasingly tense. The Ukrainians are heavily outnumbered and outgunned and have offered no resistance.

"Russian armed servicemen rushed into the unit overnight. During the attack, they beat a duty officer who tried to resist and seized a weapons storage room. The attackers rushed into the apartments where families lived.

"Russians seized mobile phones of the chief of the unit, his wife and other officers. They ordered all to pack up and leave the building. At the present time, the unit is occupied by Russian soldiers."

While the troops do not wear insignia on their uniforms, they drive in vehicles with Russian military license plates.

The Pentagon on Friday estimated as many as 20,000 Russian troops may be in Crimea but acknowledged its information was imperfect, as U.S. Defense Secretary Chuck Hagel praised the restraint of Ukrainian forces.

Pentagon spokesman Rear Admiral John Kirby, asked about the number of Russian forces in Crimea, cited estimates of up to around 20,000 of them. Pressed on the 20,000 figure, Kirby said: "That's a good estimate right now."

"But it's just an estimate. And as I said, we don't have perfect visibility on the numbers," Kirby said at a Pentagon news conference.

Serhiy Astakhov, an aide to the border guards' commander, said 30,000 Russian soldiers were now in Crimea, compared with the 11,000 permanently based with the Russian Black Sea fleet in the port of Sevastopol before the crisis.

In a telephone conversation with Ukraine's Defense Minister Ihor Tenyukh on Friday, Hagel praised Ukraine's armed forces for not allowing the situation to escalate, Kirby said.

"(Hagel) stressed the firm commitment of the United States to support the Ukrainian people and to the sovereignty and territorial integrity of Ukraine," Kirby said.

The United States has shown no interest in pursuing military options in the dispute with Russia over the Crimea, but it has taken other actions, such as cutting off military exchanges with Russia on Monday.

Poland on Thursday announced the U.S. military would send 12 F-16 fighter jets and 300 service personnel to Poland next week for a training exercise.

Kirby stopped short of confirming those figures, saying the U.S. military was still working through details.

"No decisions have been made yet, and soon as we have a mutual decision between us and Polish authorities ... of course, we'll make that public," Kirby said.