The eight defendants are charged with assaulting police during clashes at an anti-Putin rally on May 6, 2012, the day before he was sworn in for a third Kremlin term 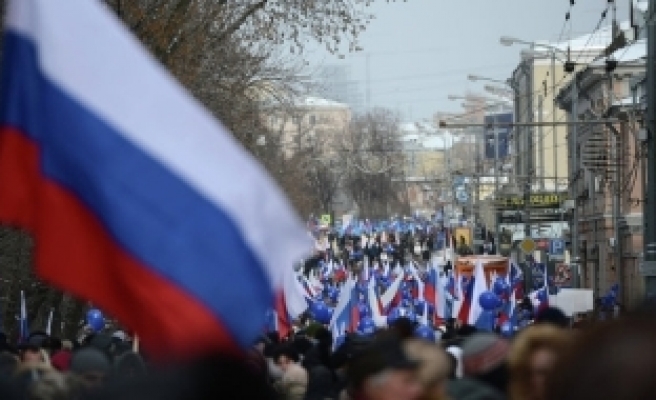 A Russian court was expected to jail eight anti-Kremlin protesters on Friday, sending a message that President Vladimir Putin will brook no challenge to his rule as neighbouring Ukraine burns, said activists.

Tension was high ahead of the hearing, as police guarding the courthouse pulled several protesters out of the crowd that gathered to support the defendants and bundled them into buses. Demonstrators shouted: "Shame!"

The mother of one of the defendants said she feared the violence in Kiev - in which at least 75 people have died in 48 hours of clashes between police and protesters - increased the chance of a harsh verdict, as Russian authorities set out to show how they dealt with unrest.

Putin says he does not use the courts as a political tool.

The eight defendants are charged with assaulting police during clashes at an anti-Putin rally on May 6, 2012, the day before he was sworn in for a third Kremlin term after weathering the biggest opposition protests of his rule.

Security was tight after the defendants were led into the courthouse, with dozens of officers keeping protesters back and many more waiting in vehicles. Police pushed into the angry crowd and grabbed at least 12 people, detaining them.

Two women from protest band Pussy Riot were in the crowd, as was Alexei Navalny, an opposition leader who is serving a five-year suspended sentence after a trial last year he said was Kremlin revenge.

Dozens of people gathered to support the defendants, chanting: "Let them go". Some wore white ribbons - a symbol of the wave of opposition protests that erupted in December 2011 - and pins reading: "Glory to the heroes of May 6."

Kremlin foes blamed the police for the violence at the 2012 rally on Moscow's Bolotnaya Square, calling it part of a clampdown on dissent that has included restrictive laws and the jailing of critics such as members of Pussy Riot.

Putin changed tack before the Sochi Winter Olympics, a major prestige project, engineering the release of two women from Pussy Riot and former oil tycoon Mikhail Khodorkovsky, who was widely seen as a political prisoner after more than 10 years in jail.

But Kremlin critics and relatives do not expect the defendants in the "Bolotnaya case" to walk free on Friday.

"Almost no one doubts that the verdict will be vindictive and cruel," Khodorkovsky, who was flown out of Russia on the day of his release in December, said in a statement on Thursday. He called it a "show trial".

"This trial is a reprisal and an attempt to frighten people," said Stella Anton, whose 21-year-old son, Denis Lutskevich, was dragged bleeding and shirtless from the protest site. He denies hitting police and said officers beat him up.

Anton said she was worried that, with Russia blaming the violence in Kiev this week on protesters trying to oust Ukraine's President Viktor Yanukovich, who is backed by Moscow, the Kremlin would want to send a tough message that violence against police will not be tolerated.

"It seems to me that because of the events in Ukraine, we cannot expect anything good," she said.

Nobody was killed at the 2012 protest and the defendants are not charged with endangering the lives or health of police. One is accused of hitting an officer with an "unidentified hard, yellow object" that his lawyers say was a lemon.

But Putin, a former KGB spy, has said anyone found guilty of attacking police must be punished.

"Unfortunately, I think they'll get real jail sentences," said Boris Nemtsov, an opposition leader. "This trial is absolutely political, the judge is carrying out the Kremlin's instructions."

The defendants - seven men and one woman, most of them in their 20s - are also charged with rioting. By law they could be sentenced to eight years in jail if convicted, though prosecutors have asked for sentences of five to six years.