'Difficulties began long before the conflict with Ukraine and the EU and US sanctions, though these aggravated the situation' 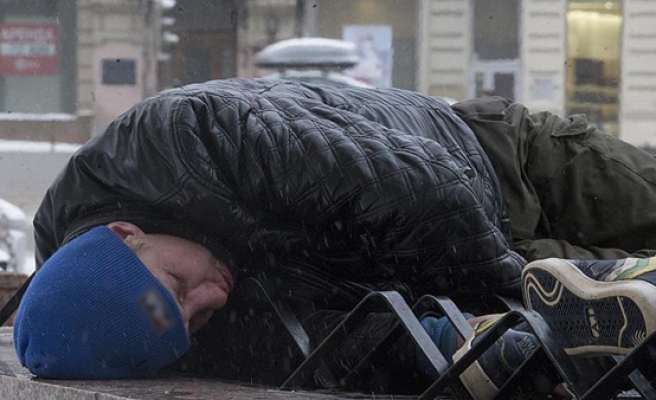 In 2015 the number of Russian citizens living in poverty rose to 19.2 million, reported Russian daily Argumenty i Fakty (AiF) this week, adding: “More Russians are getting poorer. If every ninth citizen in 2014 lived below the poverty line, then in 2015 it grew to one in seven”.

Figures from the Russian Statistics Agency (Rosstat) suggest that in the past year, the number of poor increased by 3.1 million (13.4 percent of the total Russian population). In 2014 in Russia, there were 16.1 million poor, compared to 19 million and 18.4 million respectively in 2008 and 2009, during the global economic crisis. The highest rate was seen in 2006, when 21.6 million people lived below the poverty line, according to AiF.

In relative terms, the deterioration in Russian income in 2015 set a record for the last 16 years. In year-to-year comparison, the number of poor rose 19 percent (from 16.1 million in 2014 to 19.2 million in 2015), noted financial daily Vedomosti, which reported this week that Russians have been sliding into poverty at a rapid pace.

In their forecasts, many Russian economists sounded disappointed. Businessman Sergey Varlamov told AiF: “We’re not expected to return to the 2014 income level in less than 10 years. A slow rise in poverty in Russia may help to strengthen the ruble and the stabilization of the economy. Measures necessary for improvement require a rise in GDP, supporting domestic business enterprises to help them grow. This will create new jobs, reduce unemployment, and boost people’s incomes. We need to reduce the Russian economy’s dependence on the dollar and oil sales, in order to help strengthen the ruble and reduce inflation".

Analyzing the factors behind the rising poverty, Elena Tregubova wrote in AiF that the main reason for the rapid depletion of Russians’ savings lies in a sharp drop in the real incomes of the population, coupled with rising prices. In 2015, about 4.7 percent of citizens experienced a decline in revenue while inflation reached 13 percent. In February, real incomes in Russia fell 6.9 percent, Rosstat data suggests.

Earlier Russian Labor Minister Maxim Topilin announced statistics based on a 2015 survey saying that the number of Russians whose income is below the subsistence level has risen by 3 million. "For the year, this figure rose 3 million people in absolute terms, from 16 million to 19 million people who are below the subsistence level. Among those poor families, 60%-70% are with children and hence considered most vulnerable or worst affected," Topilin was quoted as saying by AiF.

Commenting on the situation, Varlamov told AiF, "The rise in the poverty level is associated with an unfavorable economic situation in the country, which has continued for over a year, and so far there are no substantial signs of its improvement. The first signs of difficulties began to appear long before the conflict with Ukraine and the EU- and US-imposed sanctions against Russia, though these circumstances have only aggravated the situation. The ruble depreciated a lot in a relatively short period, which resulted in high, sustained inflation and rising prices. This, in turn, has led to problems of business, which began cutting production and reducing salaries. As a result, prices began to rise, and citizens found their incomes falling. The prolonging of this situation and the very slow response towards its resolution has led to an increase in the level of poverty in the country".

Topilin expects that the trend of falling real incomes will continue this year, but hopes that a fall in wages "will not be as dramatic. There may be a little decline in real wages, between 3-4 percent".

But data from the Russian Public Opinion Research Center (VTsIOM) show that in 2015 the income of up to 46 percent of people (based on calculating the income per family member) was no higher than 10,000 rubles a month (around $150). About 26 percent of Russians have an income of 10,000-15,000 rubles (per person) per month, while around 28 percent of Russians earn 15,000 a month or above. In the VTsIOM poll, some 64 percent rated their financial situation as "average", while 14 percent called it "good", and 22 percent called it "bad".

"We are witnessing a dramatic rise in the number of poor, one not seen during the crisis of 2008-2009. Then the real income didn’t fall and the number of poor didn’t rise as sharply. Now the situation is different. Under the changed Russian realities the effective welfare state should be built on the basis of 5% economic growth to provide a real opportunity to increase social support. Under today's conditions, the struggle against poverty depends on economic growth up to 70 percent and around 30 percent on how effective the fight against poverty is," AiF quoted a recent statement by former Finance Minister Alexei Kudrin.

In her analysis for Vedomosti, Olga Kuvshinova wrote that in 2014-2015, real income fell by 5.2 percent. In 2015 it fell 4.7 percent, while in January-February 2016 the decline accelerated to 6.7 percent, despite the slowdown in inflation. The decline in real wages in 2015 was almost 10 percent, to reach the lowest level since 1999. In the first months of 2016 the fall has slowed to 3.1 percent. Real pensions, as well as salaries, faced a decrease of 2015 by 3.8 percent. In 2016 they are feared to continue falling at a faster rate than wages because the government refuses to index them to inflation.