A Palestine solidarity group has organized a nation-wide boycott of Israeli products in Scotland in occasion of Ramadan, a report said. 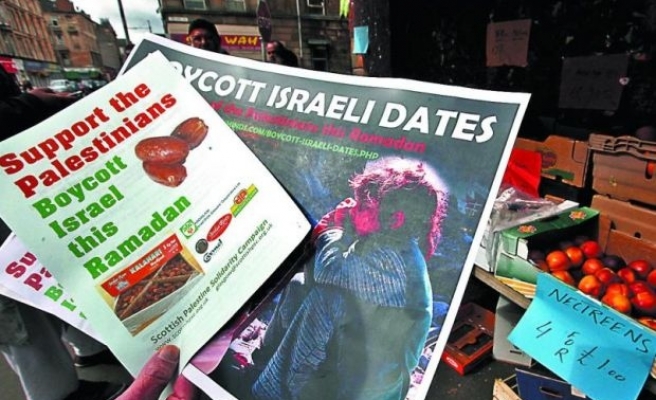 A Palestine solidarity group has organized a nation-wide boycott of Israeli products in Scotland in occasion of Ramadan, the event that campaigners said successful, a report said.

The boycott, which started in the south side of Glasgow, was deemed so successful that campaigners decided to expand it, the Scottish Palestine Solidarity Campaign (SPSC) said on website.

Palestinian officials estimate the value of settlement goods sold in the Palestinian market at up to $500 million. The settlements employ around 25,000 Palestinians.

The group says “These dates come from illegal settlements in Occupied Palestine, not the Palestinians farmers that have been kicked from their land to make way for the illegal settlers.”

The campaigners visited the shops door-by-door and presented their campaign, asking shop-owners to display the boycott poster and boycott sales of Israeli goods near the Nicholson Street mosque in Edinburgh.

“All the shops we visited backed the boycott and are now displaying posters to that effect,” Mick Napier, chairman of the SPSC, was quoted as saying. “The support we received from customers and passers-by was overwhelming.”

The SPSC says every shop it approached on the south side of the city backed the boycott.

“It’s been 100% successful. We often met with a response immediately, with people saying they would not dream of stocking Israeli goods,” Sunday Herald quoted Napier as saying.

The poster of the boycott which shop-owners put their vindows say “This shop supports the Palestinians. No Israeli produce sold here.”

Boycotted Israeli firms seek to capitalize on Ramadan in Turkey

Palestinians urged to be "free of illegal Israeli settlement goods"