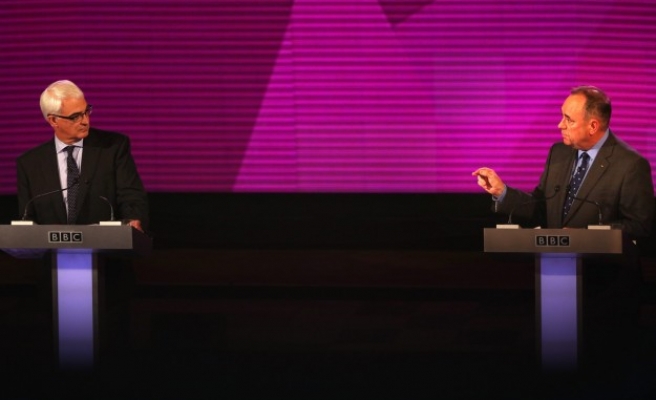 Scotland's pro-independence leader Alex Salmond easily won a final TV debate on Monday night just over three weeks before a breakaway referendum, but it wasn't clear if this would help him catch up in the polls.

In a bruising debate before the Sept. 18 referendum, Salmond relentlessly talked over Alistair Darling, the leader of the anti-independence movement, arguing Scotland would be wealthier, freer and better governed if it went it alone.

With the campaign to break up the United Kingdom and sever Scotland's 307-year union with England trailing in opinion polls by an average of up to 14 percentage points, Salmond's supporters were looking for a game-changing performance after he lost the first such encounter.

Salmond, 59, did much better this time.

In a snap Guardian/ICM poll, 71 percent of over 500 respondents judged that Salmond had won, against 29 percent who said they thought Darling had triumphed.

Britain's three main political parties want it to stay in the union, which includes England, Wales and Northern Ireland.

Professor John Curtice of Strathclyde University, a polling expert, agreed that Salmond had comfortably won the debate. But he questioned whether the nationalist leader's rhetorical victory would translate into a win at the ballot box.

"A debate doesn't necessarily win you votes," said Curtice, adding that the evening had been notable for its lack of proper discussion about wider economic questions.

"My glance at the flash poll is that while Salmond was the obvious winner, it doesn't seem to have moved votes at this stage," he said.

Scotland's press feted Salmond's performance. "Salmond Bounces Back," said the Daily Record, the second best-selling newspaper, while the top selling Sun said Darling, the leader of the "Better Together" campaign, had been "smoked" by Salmond.

Salmond, the leader of the pro-independence Scottish National Party (SNP), got more cheers in Glasgow, Scotland's biggest city, than Darling, 60, who attracted the odd groan from the audience. But he didn't land a knock out blow.

Instead, over the course of a scrappy hour-and-a-half, he repeatedly interrupted Darling and asked him the same questions again and again, a tactic which unsettled the former British finance minister who at times struggled to find a riposte.

"The eyes of the world are indeed focused on Scotland," Salmond told the audience in an emotional opening statement, urging Scots to vote for full independence. "This is our time, our moment. Let us do it now."

Scotland's health service would be better off under independence, he argued, questioning whether the British government would give Scotland more devolved powers if independence was rejected.

Scotland already has its own parliament with control over policy areas such as education and health.

Salmond was helped on Monday by sympathetic audience members who heckled Darling, including one woman who told voters not to trust a word from the former Labour finance minister.

In the last debate, Salmond came unstuck on what currency arrangements an independent Scotland would use. He advocates a pound-sharing currency union, but has struggled to explain what he would do if what was left of Britain refused that option.

All three major British parties have ruled out such a union. Salmond predicts that would change if there was a "yes" vote.

This time, Salmond was more confident if equally vague.

"I want a mandate so we can go in with the will of the Scottish people, for the common sense option of a currency union," he said in the debate, shown live on British television.

"We cannot be stopped from using the pound anyway," he argued, to loud applause from supporters in the audience.

Darling tore into Salmond for failing to spell out a "plan B" if London refused to formally share the pound, calling his idea of using sterling informally "a nonsense option".

He ended by repeating the anti-independence campaign's slogan, telling Scots they could have the "best of both worlds".

"We do not need to divide these islands into separate states in order to assert our Scottish identity," he said. "I say that we all have no option other than to say politely, respectfully, but firmly, no thanks to independence."

Salmond urged voters to grab "with both hands" what he said was a unique opportunity that might never repeat itself.

Several recent polls have shown support for independence pushing higher, but the most recent "poll of polls", on Aug. 15, which was based on an average of the last six polls and excluded undecided respondents, found support for a breakaway stood at 43 percent against 57 percent for remaining within Britain.