With 31 of 32 constituencies declared, unionists had won 55 percent of the vote while separatists were on 45 percent. 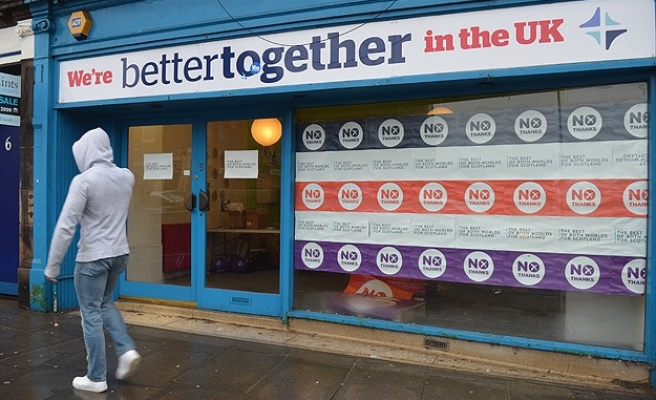 A vote for the 307-year union is a relief for millions of Britons including Prime Minister David Cameron, whose job was on the line, as well as allies across the world who were horrified at the prospect of the United Kingdom's separation.

Opponents of independence won 55 percent of the vote while separatists won 45 percent with all 3.6 million votes - a record 85 percent turnout - counted. But leaders from across the United Kingdom said the union must change if it is to endure.

Cameron said the question of Scottish independence had been settled for a generation.

"There can be no disputes, no re-runs, we have heard the settled will of the Scottish people," he said outside his official London residence in Downing Street.

Queen Elizabeth II, who is at her Scottish castle in Balmoral, is expected to make a rare comment on Friday.

The campaign for independence had electrified this country of 5.3 million but also divided the passions of friends and families from the remote Scottish islands of the Atlantic to the tough city estates of Glasgow.

Sterling strengthened sharply against the dollar and the euro on the result. British bonds and shares rose while major British companies with Scottish exposure welcomed the decision.

Royal Bank of Scotland said it had scrapped plans to move its registered office to England.

Speaking in front of an image of a giant white on blue Scottish flag, Salmond laced his admission of defeat with a warning to British politicians in London that they must respect their last minute promise of more powers for Scotland.

"Scotland will expect these to be honoured in rapid course," said Scotland's first minister before walking off the stage, his head bowed.

Opinion polls showing a surge in Scottish separatist support in the two weeks leading up to the Sept. 18 vote prompted a rushed British pledge to grant more powers to Scotland, a step that has angered some English lawmakers in Westminster.

In an effort to deflate that anger, Cameron vowed to forge a new constitutional settlement that would grant Scotland the promised powers but also give greater control to England, Wales and Northern Ireland.

"Just as Scotland will vote separately in the Scottish parliament on their issues of tax, spending and welfare, so too England, as well as Wales and Northern Ireland should be able to vote on these issues," Cameron said.

"All this must take place, in tandem with and at the same pace as the settlement for Scotland."

Cast as a constitutional revolution, commentators said Cameron's pledge of more powers to the constituent parts of the United Kingdom was aimed at sedating 'the slumbering beast of English nationalism'.

Cameron's Conservatives have seen members seep towards the United Kingdom Independence Party, an anti-European Union party, ahead of a referendum on EU membership that Cameron has promised by the end of 2017 if he wins the 2015 election.

"I'm not convinced by what I've heard this morning from Mr Cameron this morning that he seriously wants to address that," UKIP leader Nigel Farage said.

Any British vote to leave the EU would be likely to prompt calls from Scottish nationalists for another independence vote.

Seeking to tap into a cocktail of historical rivalry, opposing political tastes and a perception that London has mismanaged Scotland, nationalists said Scots, not London, should rule Scotland to build a wealthier and fairer country.

Though the nationalists won Glasgow, they failed to live up to opinion polls before the vote which forecast that the United Kingdom's fate was balanced on a knife edge.

"We have chosen unity over division, and positive change rather than needless separation," Alistair Darling, head of the "Better Together" campaign.

The vote prevents 59-year-old Salmond from winning his dream of an independent Scotland, a goal for which he has worked with a mix of shrewd calculation and nationalist passion for his entire adult life.

Unionists had warned independence would diminish the United Kingdom's standing in the world and sow financial, economic and political uncertainty during months of negotiations over a messy divorce.

U.S. President Barack Obama and European Union leaders had made clear they wanted the United Kingdom to stay together.

In Brussels, the European Commission said the Scottish vote was good for a "united, open and stronger Europe" while NATO Secretary General Anders Fogh Rasmussen welcomed the news that the the United Kingdom would stay together.

Belgian EU Trade Commissioner Karel De Gucht, whose native Flanders region is in thrall to a growing nationalist movement, said a Scottish split would have been "cataclysmic" for Europe, triggering a domino effect across the continent.

While Scottish leaders promised to work together, Scots remained divided in joy and disappointment over the fate of their country.

"Absolutely amazing," said unionist campaigner Stephen Stanners. "They shouted the loudest, so it made it seem like a majority. But we're obviously the silent dignified majority. And we pushed it through. And it just shows that Scotland loves the UK and the UK loves Scotland."

But Calum Martin, a 21 year-old history student at Edinburgh University who voted for independence said the question of secession would return.

"It's a disappointing result but it sets the stage for going forward," Martin said. "As long as there are flaws, there will be calls for independence. You can't put the genie back in the bottle once it's out."