"For me as leader my time is nearly over but for Scotland the campaign continues and the dream will never die," Scotland's First Minister and nationalist leader Alex Salmond said after his campaign for indepedence from the UK lost in a referendum. 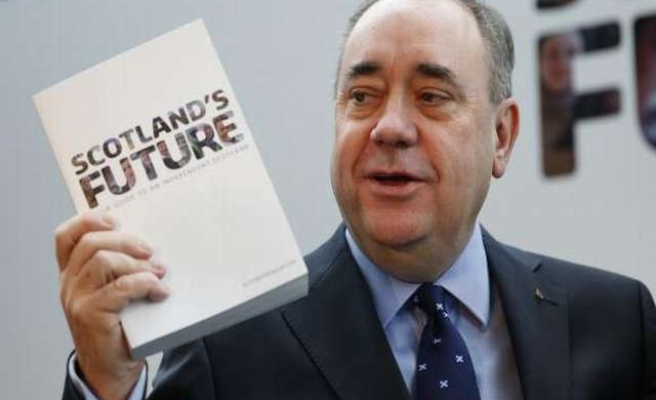 Scotland's First Minister and nationalist leader Alex Salmond conceded defeat on Friday after Scots voted against his campaign for indepedence from the United Kingdom, telling reporters he has decided to resign.

Speaking in front of an image of a giant white on blue Scottish flag, Salmond combined a pledge to respect the result with a warning to British politicians in London that they must respect their hasty promises of more powers for Scotland.

Scots would be "incandescent" if they saw London politicians dragging their feet on their promises, he said.

Salmond said he would not run again as leader of the Scottish National Party when his term ends in November and would resign as Scottish First Minister then too.

"For me as leader my time is nearly over but for Scotland the campaign continues and the dream will never die," the 59-year-old Salmond told journalists in Edinburgh, the Scottish capital which supported the United Kingdom.

British Prime Minister David Cameron said the question of Scottish independence had been settled for a generation, a goal for which Salmond has long worked with a mix of shrewd calculation and nationalist passion.

"There can be no disputes, no re-runs, we have heard the settled will of the Scottish people," he said outside his official London residence in Downing Street.

Opponents of independence won 55 percent of the vote while separatists won 45 percent with all 3.6 million votes - a record 85 percent turnout - counted. But leaders from across the United Kingdom said the union must change if it is to endure.