Scottish leader Alex Salmond, is battling a concerted effort by London to prevent a "yes" vote by undermining his central case that oil-producing Scotland could be a prosperous, independent nation. 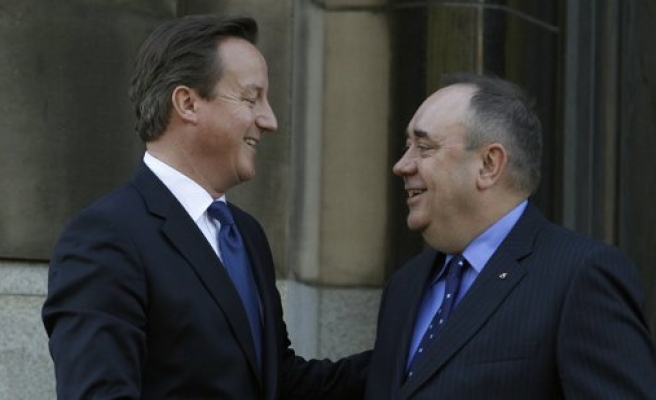 An independent Scotland would be a prosperous country that would retain close ties with the United Kingdom if voters choose to go it alone in the Sept. 18 referendum, Scottish leader Alex Salmond will say on Tuesday.

Salmond will use his first speech in London this year to address arguments against independence by British Prime Minister David Cameron, opposition leaders and some business executives.

Heading the campaign for secession, Salmond is battling a concerted effort by London to prevent a "yes" vote by undermining his Scottish National Party's central case that oil-producing Scotland could be a prosperous, independent nation.

Salmond will call on voters not to be intimidated by "diktats from on high". A vote for independence would not mean ending ties with the United Kingdom, he will say.

"Scotland will not be a foreign country after independence, any more than Ireland, Northern Ireland, England or Wales could ever be foreign countries to Scotland," Salmond will tell a New Statesman event at Westminster in London.

"We share ties of family and friendship, trade and commerce, history and culture, which have never depended on a parliament here at Westminster, and will endure and flourish long after independence."

An Ipsos-Mori opinion poll this week shows 32 percent support for independence, 57 percent against and 11 percent undecided. The gap in opinion polls has narrowed this year.

Salmond's bid to highlight Scotland's involvement with the rest of the UK comes after a row over what currency would be used if Scotland ended its 307-year union with England.

Salmond wants an independent Scotland to keep using the British pound in a currency union with the rest of the UK and the services of the Bank of England, but the three main British parties have joined forces to rule this out.

Some financial heavyweights such as the Edinburgh-based Standard Life and Royal Bank of Scotland have voiced concern about uncertainties over the currency, regulation and tax regimes in the event of Scottish independence.

By contrast, the heads of the International Airlines Group , the owner of British Airways, and discount airline Ryanair have said it could be good for business as Scotland would probably cut air passenger tax.

Salmond will say the Westminster elite was treating Scotland as "last among equals" and: "Every time we hear one of these interventions, telling us there are things we can't do, it elicits a clear response in Scotland - Yes we can."