In a press release, the Glasgow Palestine Action Network (GPAN) said it decided to take action in protest against “the UK economy’s ever growing military industrial cooperation with governments that flout international law.” 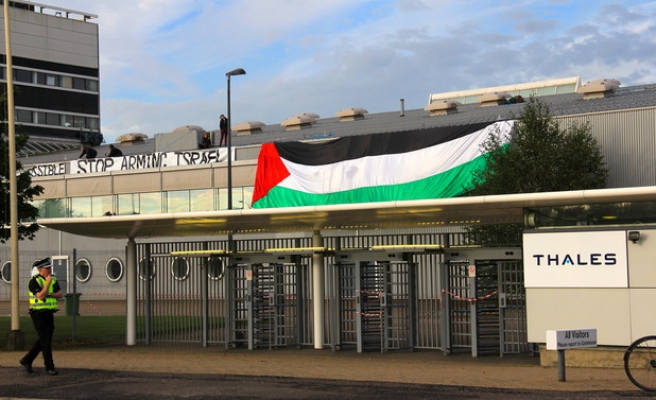 Police in Scotland have arrested ten pro-Palestinian activists who occupied a factory in Glasgow in protest against its affiliation with Israel.

The ten activists from the Glasgow Palestine Action Network (GPAN) took control of the Thales UK factory, forcing it to temporarily shut down on Tuesday.

In a press release, the group said it decided to take action in protest against “the UK economy’s ever growing military industrial cooperation with governments that flout international law.”

French subsidiary company Thales UK is, according to the Stockholm International Peace Research Institute, the eleventh largest arms producer in the world and works with Israel’s largest military technology firm Elbit Systems, with which it signed a $1.6 billion contract in 2011 to produce a fleet of Watchkeeper attack drones for the British army.

Four GPAN activists climbed to the roof of the factory on Tuesday morning, unfurling a huge Palestine flag along with pro-Palestine banners.

Meanwhile, six more activists blocked the entrances of the factory by forming a human chain, attracting the cheers of supporters in the area, Electronic Intifada reported.

“By allowing this factory to export drone components and other arms to Israel, the UK government is providing direct support and approval to Israel’s massacres,” said one activist who occupied the roof.

“There were tons of people outside the court. There were people on the street...We wanted to draw attention to the fact that drones are considered peaceful surveillance tools. But what we’re seeing in Gaza and across the world, in places like Yemen, is drones are armed and being used for lethal force,” said another activist.

After the activists were forcibly removed by police, they later released on bail on Wednesday evening with a court date scheduled for February.

Around 2,500 Palestinians were killed in Gaza when Israeli forces began pounding the blockaded enclave with air, sea and ground assaults throughout July and August.

Most of those killed were civilians, around a quarter of whom were children.