Kiev has accused Russian troops of illegally entering eastern Ukraine and, backed by its U.S. and European allies, has said it will fight to defend its soil. 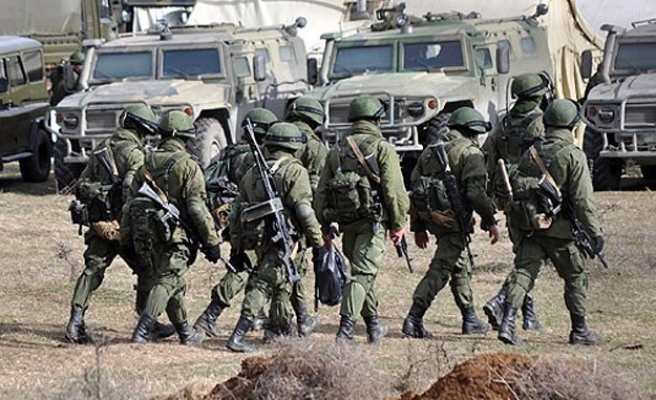 Pro-Moscow rebels fighting in Ukraine said on Friday they would comply with a request from the Kremlin and open up a 'humanitarian corridor' to allow the withdrawal of Ukrainian troops they have encircled.

It was not clear how the government in Kiev would react to the offer, suggested first by Russian President Vladimir Putin, but the first word from the Ukrainian military was negative.

It said in a statement that Putin's call showed only that "these people (the separatists) are led and controlled directly from the Kremlin".

Kiev has accused Russian troops of illegally entering eastern Ukraine and, backed by its U.S. and European allies, has said it will fight to defend its soil.

Russia stands accused of pushing troops and weapons into the former Soviet republic to shore up a separatist rebellion that a week ago appeared to be on its last legs. That development has sharply escalated the five-month conflict over eastern Ukraine.

In his late-night statement, released by the Kremlin, Putin adopted a softer tone, though without acknowledging that Russia's military is involved in the conflict.

"It is clear that the rebellion has achieved some serious successes in stopping the armed operation by Kiev," Putin was quoted as saying in the statement.

"I call on the militia forces to open a humanitarian corridor for encircled Ukraine servicemen in order to avoid pointless victims, to allow them to leave the fighting area without impediment, join their families ... to provide urgent medical aid to those wounded as a result of the military operation."

Hours later, Alexander Zakharchenko, leader of the main rebel entity in eastern Ukraine, told a Russian television station his forces were ready to let the encircled Ukrainian troops pull out.

He said they would have to leave behind their heavy armoured vehicles and ammunition.

Ukrainian President Petro Poroshenko called an urgent meeting of security chiefs late on Thursday to work out how to respond to rapid advances made by rebels in the south of the Donetsk region of eastern Ukraine.

He told the meeting that the situation was "extraordinarily difficult ... but controllable" after Russian-backed rebels seized the town of Novoazovsk in the southeast, on the shore of the Azov Sea.

Earlier Poroshenko said he had cancelled a visit to Turkey because of the "rapidly deteriorating situation" in the eastern Donetsk region, "as Russian troops have actually been brought into Ukraine".

Many Russian soldiers had been captured and many killed, he said. "Unfortunately, they have been buried simply under building rubbish. We are trying to find their bodies to return them to their mothers for burial," Heletey said.

Russia's defence ministry again denied the presence of its soldiers in Ukraine, using language redolent of the Cold War.

"We have noticed the launch of this informational 'canard' and are obliged to disappoint its overseas authors and their few apologists in Russia," a ministry official, General-Major Igor Konashenkov, told Interfax news agency. "The information contained in this material bears no relation to reality."

But some sceptical Western governments appeared to be running out of patience with Moscow's denials.

Referring to talks that Putin held with Poroshenko just two days ago, British Prime Minister David Cameron said: "It is simply not enough to engage in talks in Minsk, while Russian tanks continue to roll over the border into Ukraine. Such activity must cease immediately."

Poland's foreign minister said Russian "aggression" had created the most serious security crisis in Europe for decades. A top NATO official said Russia had significantly escalated its "military interference" in Ukraine in the past two weeks.

"We assess well over 1,000 Russian troops are now operating inside Ukraine," said Dutch Brigadier-General Nico Tak, head of NATO's crisis management centre. "They are supporting separatists (and) fighting with them."

The United States and European Union have imposed sanctions on Moscow, and both Russia and NATO have stepped up military exercises, creating the tensest East-West standoff since the Soviet Union collapsed in 1991.

The United States is considering a number of options in response to Russian involvement in eastern Ukraine and believes increasing sanctions are the "most effective tool", U.S. State Department spokeswoman Jen Psaki said.

German Chancellor Angela Merkel said an EU summit at the weekend would discuss the possibility of further sanctions.

In southern Russia on Thursday, a Reuters reporter saw a column of armoured vehicles and dust-covered troops, one of them with a face injury, about 3 km (2 miles) from the border with the part of Ukraine that Kiev says is occupied by Russian troops.

The column was driving east, away from the border, across open countryside near the village of Krasnodarovka, in Russia's Rostov region.

None of the men or vehicles had standard military identification marks, but the reporter saw a Mi-8 helicopter with a red star insignia -- consistent with Russian military markings -- land next to a nearby military first-aid tent.

Asked if he was with the Russian military, a man near the tent in camouflage fatigues but without any identifying insignia, said only: "We are patriots."

"Russia has also sent its newest air defense systems including the SA-22 into eastern Ukraine & is now directly involved in the fighting," he said.

Fighting in the east erupted in April, a month after Russia annexed Ukraine's Crimean peninsula in response to the toppling of a pro-Moscow president in Kiev.

A United Nations report this week said more than 2,200 people have been killed, not including the 298 who died when a Malaysian airliner was shot down over rebel-held territory in July.