Hundreds of pro-Russian separatists seized the regional government headquarters in Luhansk, unopposed by police, underlining the lack of control of central government over swathes of eastern Ukraine. 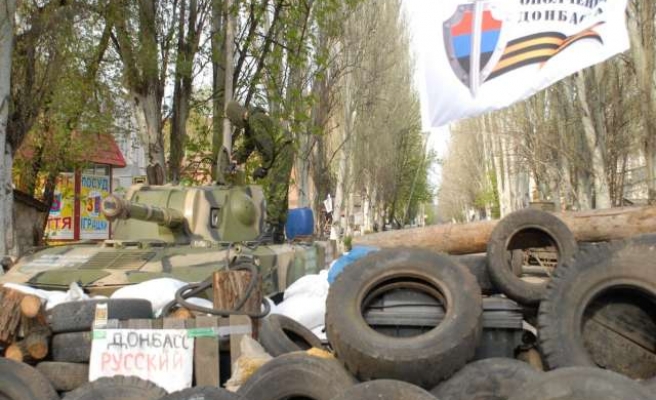 Hundreds of pro-Moscow separatists stormed government buildings in one of Ukraine's provincial capitals on Tuesday and opened fire on police holed up in a regional headquarters, a major escalation of their revolt despite new Western sanctions on Russia.

Russian share prices rose in relief at the mildness of the newly announced U.S. and European sanctions, which amounted mainly to adding a small number of names to existing blacklists while putting off threats to take more serious measures.

Demonstrators smashed their way into the provincial government headquarters in Luhansk, Ukraine's easternmost province, which abuts the Russian border, and raised separatist flags over the building, while police did nothing to interfere.

As night fell, about 20 rebel gunmen opened fire with automatic weapons and threw stun grenades at the headquarters of the region's police, trying to force those inside to surrender their weapons, a Reuters photographer at the scene said.

"The regional leadership does not control its police force," said Stanislav Rechynsky, an aide to Interior Minister Arsen Avakov, referring to events in Luhansk. "The local police did nothing."

The rebels also seized the prosecutor's office and the television centre.

The separatist operation in Luhansk appears to give the pro-Moscow rebels control of a second provincial capital. They already control much of neighbouring Donetsk province, where they have proclaimed an independent "People's Republic of Donetsk" and declared a referendum on secession for May 11.

The rebels include local youths armed with clubs and chains, as well as "green men" - heavily armed masked men in military uniforms without insignia.

Adding control of Luhansk would give them sway over the entire Donbass coalfield - an unbroken swathe of territory adjacent to Russia - where giant steel smelters and heavy plants produce around a third of Ukraine's industrial output.

It is the heart of an area that Russian President Vladimir Putin described earlier this month as "New Russia", reviving a term from when the tsars conquered it in the 18th and 19th centuries. Most people who live in the area now identify themselves as Ukrainians but speak Russian as a first language.

Ukraine, a country of 45 million people the size of France, has a thousand-year history as a state but has spent much of the last few centuries under the shadow of its larger neighbour. It emerged as a modern independent nation after the Soviet Union broke up in 1991, with borders drawn up by Bolshevik commissars from territory previously ruled by Russia, Poland and Austria.

Its present crisis erupted after a pro-Russian president was toppled in February in a popular uprising. Within days, Putin had declared the right to use military force and had dispatched his undercover troops to seize Crimea.

The United States and European Union accuse Moscow of directing the uprising with the intent of dismembering Ukraine.

"Today, Russia seeks to change the security landscape of eastern and central Europe," U.S. Secretary of State John Kerry said in a speech on Tuesday. "Whatever path Russia chooses, the United States and our allies will stand together in our defence of Ukraine," Kerry said.

Nevertheless, U.S. and European officials have repeatedly made clear they will not consider military action.

The U.S. embassy in Kiev described the behaviour of pro-Russian activists, who also violently attacked a rally of Kiev supporters on Monday with clubs and iron bars, and are holding dozens of hostages including seven unarmed European military monitors, as "terrorism, pure and simple".

But so far they have shown no sign of restraining the Kremlin leader, who overturned decades of post-Cold War diplomacy last month to seize and annex Ukraine's Crimea peninsula and has since massed tens of thousands of troops on the frontier. Russia has openly threatened to invade to protect Russian speakers, though it denies that it plans to do so.

Russia's RTS stock index rose 1.23 percent on Tuesday in relief that the latest EU and U.S. sanctions were so modest.

After Russia seized Crimea in March, Washington and Brussels each drew up sanctions blacklists that ban travel by and freeze the assets of individuals and firms deemed to have played a role in threatening Ukraine. The EU added 15 Russians and pro-Russian Ukrainians to its blacklist on Tuesday, a day after Washington added seven individuals and 17 firms to its own list.

But neither list includes any of Russia's major firms.

The latest U.S. list names Igor Sechin, a long-time Putin ally who now heads Russia's biggest oil company, Rosneft , but the firm said the blacklisting of its boss would not affect its operations, including plans to buy the oil trading arm of Wall Street bank Morgan Stanley.

Sechin's name was conspicuously left off the EU list. European countries do more than 10 times as much trade with Russia as the United States, buying a quarter of their natural gas from Moscow. They have been slower than Washington to embrace sanctions that might jeopardise trade.

Moscow has shrugged off the blacklists as pointless, though Washington and Brussels say they have had an indirect economic impact by scaring investors into withdrawing capital.

"You have to look over the period of time Russia went into Crimea; since we've imposed sanctions, there has been a quite substantial deterioration in Russia's already weak economy," U.S. Treasury Secretary Jack Lew told congressional hearings.

On Friday, the rebels captured eight unarmed European military monitors. A Swede was freed three days later, but four Germans, a Dane, a Czech and a Pole are still being held in Slaviansk, a town in Donetsk province that rebels have turned into a heavily fortified de facto capital.

The self-declared "people's mayor" of the town, Vyacheslav Ponomaryov, said on Tuesday he would discuss their release only if the EU dropped sanctions against rebel leaders.

"If they fail to remove the sanctions, then we will block access for EU representatives, and they won't be able to get to us. I will remind my guests from the OSCE about this," he said, referring to the European hostages. Nevertheless, he later met OSCE representatives and said they had made "good progress" in discussions on the release of the captives.

Ukraine's authorities are struggling to find a way to evict the separatists, who also took a small town hall in Pervomaisk in the Luhansk region on Tuesday and a number of buildings in another city on Monday. Kiev launched an "anti-terrorist" operation in early April, but so far it yielded few results.

The Russian Foreign Ministry said the EU sanctions would not ease tensions in Ukraine.

"Instead of forcing the Kiev clique to sit at the table with southeastern Ukraine to negotiate the future structure of the country, our partners are doing Washington's bidding with new unfriendly gestures aimed at Russia," the ministry said.

Gennady Kernes, the mayor of eastern Ukraine's biggest city, Kharkiv, was in a stable condition on Tuesday in a hospital in Israel, where he was flown after an assassination attempt.

Kernes, one of Ukraine's most prominent Jewish politicians, was shot in the back on Monday in Kharkiv.