U.S. and European officials say they are concerned that a Britain amputated of a third of its territory and 8 percent of its population would be more introverted and less willing to engage in military coalitions abroad. 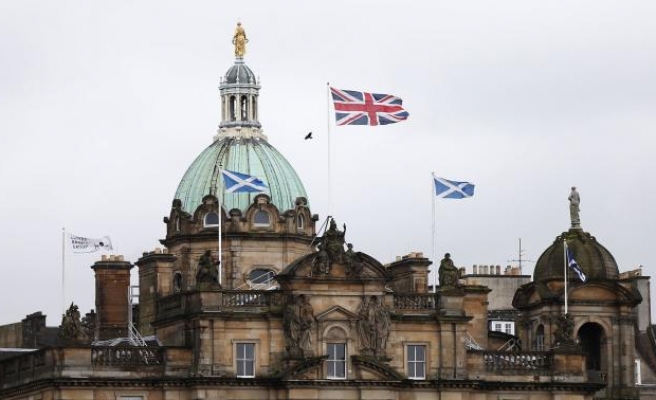 Britain's international partners are aghast, mostly in silence, at the possibility that one of the leading Western powers could break up and turn in on itself if Scotland votes next week for independence from London.

Many fear such a split would foreshadow a British exit from the European Union, on which Prime Minister David Cameron has promised a referendum in 2017, weakening the world's sixth largest economy and its continental partners.

Some also fear it would set a precedent, boosting separatism in Catalonia and elsewhere in Europe. Independence campaigners from around the continent have underlined this by flocking to Edinburgh to support the "Yes" campaign and draw lessons for their own struggles.

Some posed for a group photograph with Scottish nationalist leader Alex Salmond, now racing to turn narrowing opinion polls into a win in the Sept. 18 vote.

The idea is not sitting well in leading capitals.

U.S. President Barack Obama has been forthright in urging Britons to stay together and in the EU.

"We obviously have a deep interest in making sure that one of the closest allies that we will ever have remains a strong, robust, united and effective partner," Obama said on a visit to Europe in June.

U.S. Navy Secretary Ray Mabus, while stressing it was up to the Scottish people to decide, underlined this week the importance of Scotland in building Britain's aircraft carriers and as the base for its nuclear submarine force.

"It would be unwise for an American to take sides in this, but there would be some issues that would require some serious work," he told a Reuters Summit on Wednesday.

Privately, U.S. and European officials say they are concerned that a Britain amputated of a third of its territory and 8 percent of its population would be more introverted and less willing to engage in military coalitions abroad.

While France has said it is willing to join Obama in air strikes against ISIL militants in Iraq, Cameron has played for time and avoided a clear commitment so far.

European partners have tried to be quietly supportive of Cameron on Scotland, underlining how keen they are to keep Britain in the EU, while privately puzzling over his decision to risk everything on two uncertain referendums.

"A Scottish exit from the union (with England, Wales and Northern Ireland) would be bound to heat up the debate about an early referendum (on leaving the EU)," said Phillip Missfelder, foreign policy spokesman for Chancellor Angela Merkel's conservatives in the German parliament.

Merkel has made clear Berlin wants to keep Britain in the EU and is willing to accommodate some of London's demands for changes to help Cameron win the in/out plebiscite he has promised if he is re-elected next year.

Publicly, she has avoided taking sides on Scotland, saying: "There's a fair campaign taking place. So I have nothing to criticise. I also think the British are not waiting for advice from the German chancellor on what to do, let alone the Scots."

But German Foreign Minister Frank-Walter Steinmeier was less cautious on Thursday. "I would openly admit that I would rather see Great Britain remain together," he told a news conference in Berlin with his British counterpart Philip Hammond.

In highly centralised France, it is the precedent of separatism that is causing most political anguish.

"The idea that this can happen in Europe in regions like Scotland - even though it isn't at all the same context - demonstrates that frontiers are exploding and this is worrying," said Socialist Patricia Adam, who chairs parliament's defence committee.

Some foreign businesses are also worried. The head of France's Thales, which employs 7,500 people in Britain as one of its biggest defence suppliers, said a Scottish vote to secede would create uncertainty and put into question jobs and production sites on both sides of the border.

Some European diplomats are alarmed by Cameron's high-wire strategy for trying to hold the country together and keep it in Europe: "How could he take such ill-calculated risks?" a French diplomat asked privately.

He pointed to France's own history of lost referendums that brought down President Charles de Gaulle in 1969, stopped a proposed EU constitution in 2005 and very nearly killed off Europe's single currency before it was born in 1992, when voters approved the Maastricht Treaty by a whisker.

If Scotland does vote for independence, its future status with the EU could be a matter of lengthy dispute.

European Commission chief Jose Manuel Barroso infuriated nationalists in February by saying a breakaway Scotland would have to reapply for EU membership and would find it "extremely difficult, if not impossible" to gain unanimous approval.

Some legal scholars question his stance, citing the precedent of Algeria, which kept an associate status with the European Economic Community for six years after gaining independence from France in 1962.

Diplomats say the Commission was bound to support Britain, a member state, in its legal interpretation before the vote. But EU governments would be likely to take a more pragmatic approach to Scotland if the vote were won.

International law professor Nicolas Levrat of the Institute of Global Studies at Geneva University said Scotland could start a multiplication of new states that would force the EU to change the way it is governed.

"If Scotland becomes an independent state and manages to get into the EU, it will not be the only one. There will be what we call a domino effect," he said, citing Spain's autonomous provinces of Catalonia and the Basque Country.

The Catalan government wants to hold a consultative referendum on statehood on Nov. 9 but the Spanish government says that is illegal. Hundreds of thousands of Catalans, their ambitions boosted by the Scottish referendum, formed a giant human V in the streets of Barcelona on Thursday to demand the right to vote on splitting from Spain.

"The Scottish vote for us is an injection of enthusiasm and hope," said Alfred Bosch, spokesman for Catalonia's Republican Left party. "The difference is that the UK government has been democratic and allowed it, but the Spanish government hasn't."

Spanish Prime Minister Mariano Rajoy has been silent on Scotland but the head of the Catalan regional government, Artur Mas, has said a Scottish "Yes" would be positive for the independence movement.

Conservative Spanish commentators have slammed Cameron for allowing the Scottish vote. Respected columnist Jose Antonio Zarzalejos called it "one of the greatest risks for the EU and for Great Britain in 300 years".

"If secession in Scotland prospers because of Cameron's huge and historic clumsiness, the EU will jump into action so that similar situations are not repeated, and it will pressure governments to negotiate with the secessionist movements we already have," he wrote on elconfidencial.com.

Ireland is worried about the impact of a Scottish "Yes" on Northern Ireland, part of Britain and divided between Protestants who mostly support continued union with Britain and Catholics who tend to favour unity with Dublin.

The Irish government's National Risk Assessment report said the Scottish vote could introduce "an element of instability" in Northern Ireland, where a 1998 peace accord largely ended three decades of sectarian violence.

Irish Public Spending and Reform Minister Brendan Howlin said whatever the result, there was bound to be constitutional change in Britain that could affect his country.

"A British exit (from the EU) is definitely not in our interest," he told reporters in Paris.

Support for independence is much more limited in other parts of Europe such as Flanders in Belgium or the swathe of Northern Italy which separatists call Padania.

The main Flemish nationalist party, the N-VA, has played down its separatist agenda and is about to join a Belgian federal government for the first time. Support for independence in Flanders is only about 10-15 percent, said Dave Sinardet, a political scientist at the Free University of Brussels.