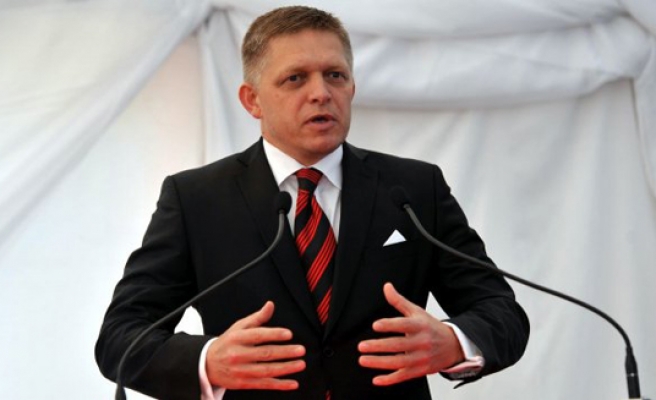 A conservative party leader described the outcome as a "big earthquake" in Slovak politics, as analysts cautioned that Fico would struggle to build a governing coalition with a total of eight parties reaching the five percent threshold to enter parliament.

With 99 percent of votes counted, Fico's Smer-Social Democrats (Smer-SD) party had 49 seats, down sharply from his comfortable 83-seat majority in the 150 member parliament.

Having earlier dubbed the result a "big mishmash" of parties, Fico announced Sunday morning the start of coalition talks.

"Today we begin the first preliminary negotiations", vowing to "try to assemble a meaningful and stable government."

"It isn't going to be easy. We'll have to do everything to rule out the likelihood of early elections."

The liberal Freedom and Solidarity SaS came second with 21 seats, followed by the conservative OLANO-NOVA which took 19 seats. Its leader Igor Matovic told Slovakia's TASR news agency: "This is a big earthquake."

Building a coalition "could take weeks, even months", political analyst Samuel Abraham told AFP, adding that for Fico to clinch his third term, he would likely "distance himself" from the far right and woo three or four centrist parties like SaS.

The far-right Slovak National Party (SNS) made it back into parliament after a four-year absence with 15 seats.

"It will be a major disaster at the time when the Slovak Republic will preside over the European Union to have fascists in our parliament," Smer-SD MEP Monika Flasikova Benova said Saturday.

"Kotleba is a neo-Nazi... Fico used nationalist rhetoric regarding migrants and this strengthened the extreme right in Slovakia," Abraham added.

Another analyst, Abel Ravasz, said "Fico will need at least two to three partners to form a coalition and a government.

"The opposition can only form a government if it can gather six centrist and right parties in an alliance".

All have shunned refugees as Europe grapples with its worst migration crisis since World War II.

Fico vowed to "never bring even a single Muslim to Slovakia" and filed a lawsuit against an EU-wide plan to redistribute refugees across the bloc.

As Slovakia prepares to take over the EU presidency in July, Fico starkly warned that "we have reached the point when... Greece is likely to be sacrificed for the sake of Schengen", referring to the 26-nation passport-free travel zone.

Greece has become the major hub for asylum seekers in the EU. Athens shot back, accusing Fico of running "his election campaign with vitriol and human drama" and questioned his ability to lead the EU presidency.

Analyst Ravasz told AFP that Fico missed the mark with his unwavering anti-refugee drive as bread and butter issues like salary hikes for public sector workers came to the fore in the final days of the campaign.

"His favourite topic, the migrant issue lost a lot of momentum in the previous weeks and the new topical issues, namely the protests of teachers and health personnel, were not handled well by Fico."