The business activities of Oleksander, who trained as a dentist, have long been the object of scrutiny by critics of Yanukovich. 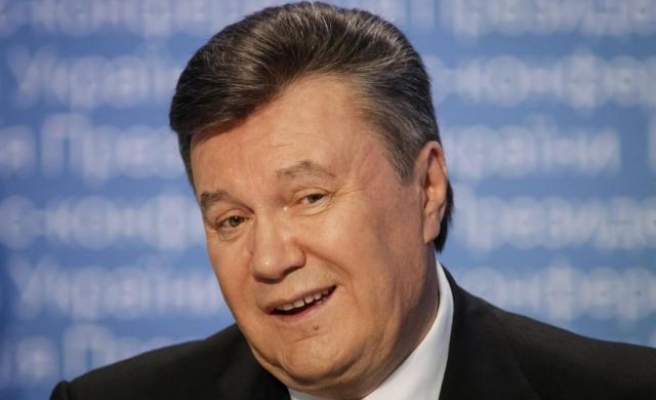 On a street in ousted President Yanukovich's political stronghold, Donetsk, stands the imposing headquarters of the Mako Group, a Ukrainian banking-to-construction conglomerate.

The 20-storey block is modern but built in the decorated style of the Stalin era and contains a hotel, restaurant, bank, and Mako's unmarked offices - all, according to residents, belonging to Yanukovich's eldest son Oleksander, 40.

The business activities of Oleksander, who trained as a dentist, have long been the object of scrutiny by critics of Yanukovich.

Two opposition research groups, PEPWatch and Anticorruption Action Centre, say on yanukovich.info, a website they jointly run, that his assets have risen by 7,285 percent in three years. These were valued at $510 million by Forbes-Ukraine last year.

Oleksander is the owner of a major bank, the Ukrainian Bank of Development, according to central bank data, and also the 100 percent owner of the private Mako Group, according to a spokesman for Mako. UBD did not immediately respond to a request for comment.

With both companies involved in large-scale gas, coal and property development projects across Ukraine, it is already clear that Oleksander's business will be at the centre of inquiries by prosecutors into his family's wealth.

At the core of such inquiries - and into other wealthy politicians close to Yanukovich named in a Swiss asset-freezing order on Friday - is whether they used their connections to divert public money into their businesses.

The chief executive of the bank is Valentyna Arbuzova, the mother of a former acting prime minister under Yanukovich, Serhiy Arbuzov, who was named on the Swiss government's list of Ukrainians whose assets were being frozen.

Tetyana Chernovil, proposed head of a new Ukraine anti-corruption agency, told Reuters: "It is very difficult to divide the son and the father. If the father had a monopoly of the power in the country, his son was the monopolist in business."

Chernovil said the Yanukovich family took a cut of almost all business in the country, even if assets were registered in the name of other associates. Her allegations, and those of other critics, could not be independently verified by Reuters.

At a news conference in Russia on Friday, the deposed president denied he had any foreign bank accounts.

Oleksander could not be reached for comment. But, responding to a question about Switzerland's asset freeze, Mako responded that, if affected by the measures, it would end the company's exports of coal from Ukraine to 23 countries.

Accounts of the firm were transparent and fully audited, and all appropriate taxes were paid in Switzerland, it said.

The statement said: "We also want to emphasize that in the event of the accounts of Mako trading being effectively blocked, this will lead to a suspension of the company's exports of coal from Ukraine." This would only cost the country foreign currency, it added.

At his country home, in the outskirts of Donetsk, which is protected by a three-metre concrete wall, there was no sign of Oleksander. A security guard declined to speak to Reuters. Neighbours said they had never seen him.

One elderly resident said: "When he arrives he comes in a car, and the police block the streets so we have never seen who is coming in."

According to Chernovil, business activities under scrutiny in which the Yanukovich family and its allies are suspected of extracting a secret share included deals for import of gas into Ukraine from Russia, deals for oil and gas drilling rights in the Black Sea and inland, and coal mining contracts.

Also under scrutiny are the ownership and management of presidential estates, including Yanukovich's palatial spread at Mezhyhirya outside Kiev, and a large office development, complete with heliport on the roof, built in front of the Ukrainian parliament.

Oleh Makhnytsky, the acting prosecutor-general, told Reuters on Wednesday the deposed president's aides were stealing "not millions but billions" of dollars.

Some clues, according to Makhnytsky, might be found in the tens of thousands of documents discovered at the former residences of the president and his friends.

At the Mezhyhirya estate, where luxuries from a private golf course and pet zoo to a fake Spanish galleon were discovered, journalists and activists have been scanning nearly 200 folders, each with about 500 pages. Many folders had been dumped in a lake on the grounds; some had to be recovered by divers.

According to Vlad Lavrov, one of the journalists involved, the documents came mostly from the management office on the estate of its owner, the firm Tantalit, in turn owned by Serhiy Klyuev, a businessman and member of parliament who was one of those whose foreign assets were frozen.

In an interview with Reuters on Thursday, Klyuev, who is the brother of Yanukovich's chief of staff, Andriy Klyuev, whose assets were also frozen by the Swiss, denounced "dirty propaganda" against him and his brother.

A further statement to Reuters from Serhiy Klyuev on Friday rejected accusations that he was part of the so-called "Family" - a term used by Yanukovich's opponents for his inner circle. "The Klyuevs are not a part and never have been" part of them, said the statement.

"To put the false information straight he will ask the Swiss and Austrian authorities for him to give them testimony, which will demonstrate that there has been no wrongdoing by him and his family members," it said.

In response to asset freezing orders that cover Switzerland and Austria, the statement said: "His brother always stated that he has no property or bank accounts in Austria, which can be proven."

COAL EXPORTS COULD BE HIT

Switzerland's freezing of bank accounts linked to the family of ousted Ukrainian President Viktor Yanukovich could reduce coal exports from Ukraine, a company owned by his son warned on Friday.

In a statement to Reuters, a Ukrainian conglomerate, the Mako Group, based in Yanukovich's political stronghold Donetsk, in eastern Ukraine, confirmed it was 100 percent owned by Oleksander Yanukovich, a son of the former president. His and Oleksander's foreign assets were frozen by Switzerland, Austria and Liechtenstein earlier in the day.

Asked by Reuters to respond to the Swiss measures, the company said it had yet to be informed, but would seek the advice of lawyers if the reports proved true.

Accounts of the firm were transparent and fully audited, and all appropriate taxes were paid in Switzerland, it said.

The statement said: "We also want to emphasize that in the event of the accounts of Mako trading being effectively blocked, this will lead to a suspension of the company's exports of coal from Ukraine." This would only cost the country foreign currency, it said.