The appeal by Tutu follows a decision in January by PGGM, another Dutch pension fund, to pull its investments from five Israeli banks 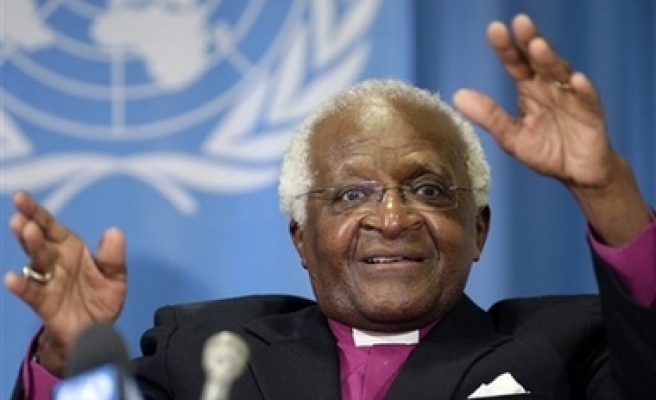 An ABP spokeswoman said the management board would discuss Tutu's appeal at its monthly meeting on Thursday, alongside a letter from 'Christians for Israel', a Dutch lobby group which wants the fund to remain invested in the Israeli banks.

ABP, which had 309 billion euros ($408 billion) invested worldwide at the end of 2013, has nearly three million members in the Netherlands and holdings totalling about 51 million euros in the three Israeli banks - Bank Hapoalim, Bank Leumi and Mizrahi Tefahot Bank.

Tutu, one of the champions of South Africa's struggle for democracy, said in his letter to the ABP board which was also published online that the fund's investments "enable the expansion of Israeli settlements on occupied Palestinian territories, and profit from the illegal seizure of this land".

"Your Board has a choice - continue to turn a blind eye to the facts and claim ABP investments are somehow ring-fenced from bolstering Israel's occupation, or join the growing movement towards divestment, which will reduce the company's risk, respect international law and strike a powerful, non-violent blow for peace in the Middle East," he said in the letter.

ABP spokeswoman Jos van Dijk said that, while the United Nations had criticised Israel's settlements in occupied Palestinian territories, the world body had not accused the Israeli banks of breaking any international laws.

"We have strict judicial criteria for disinvesting and many people act out of emotion, which is understandable, because everybody hates war," van Dijk said.

The fund does not invest in companies which violate the U.N. Global Compact, an international yardstick for ethical investment, in companies that manufacture cluster bombs landmines or in countries under U.N. sanctions, she said.

The appeal by Tutu, the retired Anglican archbishop of Cape Town and Nobel Peace Laureate, follows a decision in January by PGGM, another Dutch pension fund, to pull its investments from five Israeli banks, including the three named in the letter.

"Almost 1.8 million people around the world have already called on ABP to divest, including tens of thousands of Dutch citizens and many pension holders," Tutu said in his letter, which was posted on the website of Avaaz, an international lobby group which backs the call for disinvestment.

In December, Dutch firm Vitens said it would not work with Israeli utility company Mekorot because of its footprint in the occupied West Bank.