A bus careened off a central Spanish highway and smashed into a safety barrier Monday, tearing open one side of the vehicle and killing nine people. 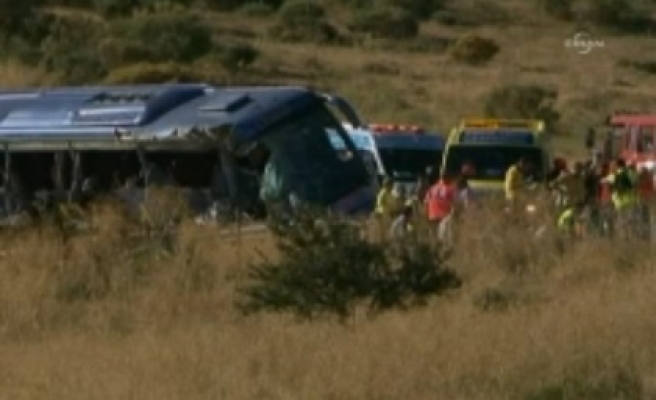 A bus careened off a central Spanish highway and smashed into a safety barrier Monday, tearing open one side of the vehicle and killing nine people.

At least another 20 people were injured when the bus came off the road as it travelled downhill near Avila northwest of Madrid, trapping several passengers in the wreckage, emergency services said.

The blue single-decker bus, which carried the markings of a private company, Cevesa, ended up nearly on one side, a buckled safety barrier preventing it from sliding further down a slope by the road.

The entire right-hand side of the bus facing the slope was peeled open, windows shattered and buckled support pillars left exposed, first photographs in the Spanish online media showed.

"Nine people have died and 20 have been injured, five seriously," said a statement by the emergency services for the region of Castile and Leon.

A dozen ambulances, two medical helicopters and teams of firefighters converged on the scene.
Four bodies lay on the N-403 road, completely covered in white sheets or shiny gold and silver foil.

Emergency services workers in black helmets and tunics carried one person away in a stretcher and several other people, apparently shocked passengers, sat on the kerb nearby.
A female medical rescuer in white shirt and bright-orange vest could be seen placing a neck brace on a man lying on a yellow stretcher on the roadside.

The bus had been heading to the provincial capital Avila from the province's southern town of Serranillos and was less than 10 kilometres (six miles) from its destination when disaster struck at about 8:45 am (0645 GMT).

"It came off the road for unknown reasons," said the central government representative for Avila, Ramiro Ruiz Medrano.

"They are investigating the possible causes at the moment," Medrano told Spanish public radio.

"There are some with very serious injuries, others are in shock," he said.
The driver was uninjured, Medrano said, adding that the vehicle's insurance papers and road worthiness certificates were in order.

The injured were taken to hospitals in Avila for treatment or to be checked, emergency services said.

One girl was flown about 100 kilometres (60 miles) by helicopter to a major hospital in Salamanca.

A team of psychologists was activated to comfort the victims' families, who were taken to the Avila sports stadium.

In the last major bus accident in Spain on July 31, 2009, six Dutch tourists were killed and 39 injured when their bus overturned on a motorway curve near the northeastern city of Barcelona.

More recently, a dozen German tourists were injured August 11, 2011 when their tourist bus hit a wall in Manocor on the Balearic Island of Mallorca.